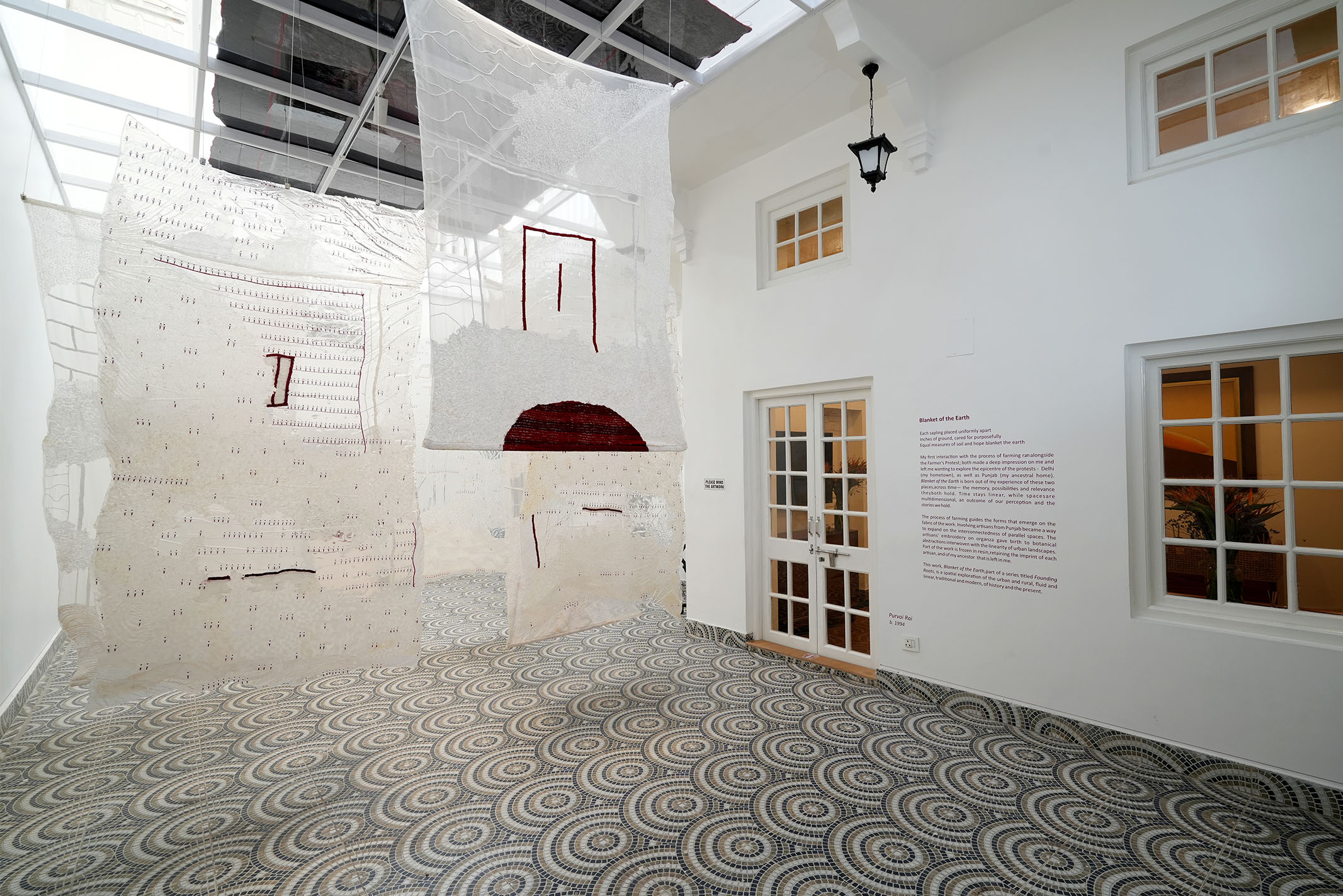 Currently on display at Dhoomimal Gallery in Delhi is a remarkable showcase of abstract art by 30 leading South Asian and diaspora artists from the 20th Century to the present. Rare works by some of the most influential names in art such as V.S. Gaitonde, S. H. Raza, and Zarina Hashmi are exhibited alongside cutting-edge site-specific installations by emerging artists like Purvai Rai and Varun Desai. What ties them together in this ambitious show is Manmeet K Walia’s curatorial vision. Titled ‘Lines (By) Lines’, it explores how a diverse spectrum of modern and contemporary art from the region has explored abstraction, through the prism of linearity and lines. Design Pataki’s experience of the show was immersive, to say the least. ‘Lines (By) Lines’ is presented at Dhoomimal Gallery’s expanded multi-level space in New Delhi, restricted not only to the exhibition rooms, but taking over the staircases, corridors, and outdoor spaces too.

Walia acknowledges the variation in the approach to the language of lines over different ages, documented through the works of multiple generations of artists. “The gallery has a fantastic collection of modern masters, and a rich history,” Walia tells us. “As it is expanding its programming to focus more on the contemporary, and drawing connections between its roots and cutting edge contemporary practices – this show has a focus on abstract practices and linearity specifically. And we made a decision to include some of the monumental works from the collection to create an experience of time travel, where the viewer could make connections between generations of significant artists in the region.”

The concept for the show is in part, woven from the history of the gallery itself. Established in 1936 by Sh. Ram Babu Jain, Dhoomimal is the oldest contemporary art gallery in India. In its early days, the gallery supported painters such as the late Sailoz Mookherjea and Jamini Roy and became a meeting place to further creative discourse. During this time, the space was frequented by many who went on to become some of India’s most notable artists. Dhoomimal’s rich repository includes the works of F.N. Souza, J. Swaminathan, H.A. Gade, Bimal Das Gupta, Jamini Roy, Sailoz Mookherjea, Anjolie Ela Menon, to name just a few.

Having said that, securing all the pieces for the exhibit, especially those of the diaspora artists, was not an effortless task, according to Walia. “Getting all the works in the gallery has been an experience in itself,” she says. “We were excited to be able to bring together works from private collections, galleries, and artists. Working with the multi-level space the gallery has in a heritage building in central Delhi was a special opportunity and also a challenge, and we worked with production specialists to bring it together.” Spaces were built for the digital and site-specific installations, such as Varun Desai, Visakh Menon, and Purvai Rai’s works. “We had to improvise solutions, we learned a lot; and the result was beautiful.”

Featuring on the walls alongside the pieces of art are quotes by the artists that give you an insight into not only their creative vision, but also the selection process within the context of the exhibition. This was important to Walia, who stressed the importance of approachability in art appreciation.
Lines (By) Lines will be on display at Dhoomimal Gallery till the 15th of May, 2022.