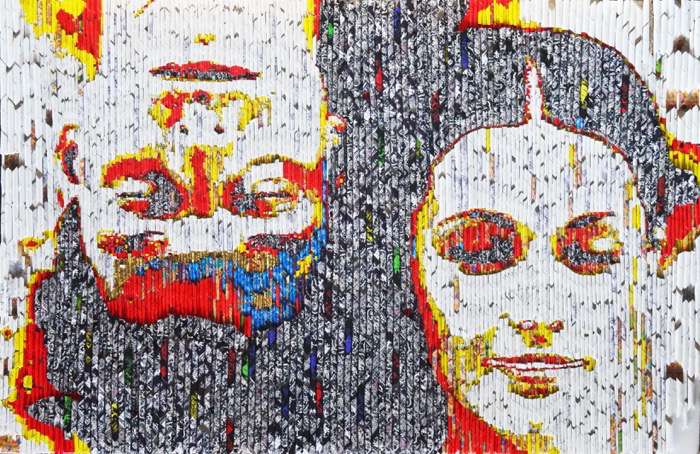 In Conversation with Artist, Vinita Dasgupta

If there was one word to describe the Indian contemporary art scene today, it would be – unpredictable. Mixed media, awe-striking installations and stylistic creations that materialise from the quaint, decadent and even drab. It’s hard to categorise these young artists who are creating a distinct style for themselves not only in the country but also in the global art world.

One such artist is Calcutta-born Vinita Dasgupta. Now based in Delhi she arrests her audience with work that amalgamates the charms of folk art and quirk of pop-culture. Her muses that range from the rural Kathakali dancer to Marilyn Monroe find a new life when they are presented through her experimental medium – “the rolled canvas technique”.  Her aesthetics that have found a home both with private collectors and international museums are sure to leave you arrested in awe.
So at Design Pataki, we decided to catch up with this rising star of the contemporary art world, who also happens to be one of the most “expensive women painters” in India, about her influences, musings and what she sees as the future of art.

Design Pataki: How did Indian pop-culture, folk art and mythology become such an integral part of your work?
Vinita Dasgupta: As a child, I would immerse myself in Indian mythology stories, which never failed to fascinate me. The characters of those tales are so powerful that they find their way well into my work even today. As for bringing Indian pop-culture, especially Bollywood culture to my work was an effort to preserve and celebrate its uniqueness in a time where it seems to be gradually replaced by other new-age art forms. So I try to blend both these loves of mine – traditional Indian art and Indian pop-culture in one space.
Also, I have lived in different parts of India, including Calcutta, Bhubaneswar, Allahabad, Jabalpur before finally settling in Delhi. So these places, their people and their distinctly vibrant cultures have also inevitably found a space in my work.
DP: Your work feature a lot of women from different eras, cultures and walks of life. Why do you find yourself drawn towards them?
VD: I don’t think I deliberately paint women. But the women in my family have always been so headstrong, that I find myself automatically drawn to portraying other inspirational women from in my work. One such woman is my grandmother, who crossed the border from Bangladesh to India during partition, single-handedly raised her family and motivated them to achieve their dreams.
DP: The ‘rolled canvas technique’ – when and how did you develop this mesmerising signature style? Do take us through the process of creating a complete art piece with this technique.
VD: In 2010, I visited Raghurajpur; Orissa for an art workshop. There I spent fifteen days with local artists whose artwork inspired me so deeply that I returned home and began experimenting with different mediums. Finally, after a year, I developed my signature style.
In this technique, I first draw the image on a cloth, which is pasted on a board.  Then I paint and print on this canvas cloth. After which I cut and roll the cloth in numerous sizes and finally paste the rolls in accordance with the image. It is a very playful process where I find a lot of scope to explore the medium with paints and rolls to ultimately create a 3D image!
Depending on size and drawing, each piece which is completely handmade can take between two-five months to get done. Though sometimes an incomplete artwork looks better than my initial vision for it, so I leave it at that.
DP: You are an iconic example of artistic and commercial success in the art world. What would be your advice to other Indian artists seeking the same?
VD: In my first year of college, I had an exhibition where I sold a big piece for Rs 5,000. I think that monetary success inspired me to value my work even more. From then on, I sold everything I created at a good price. Though that is possible only because with each piece of art that I work on, I look forward to surprising my viewers. There really is no shortcut to success.
DP: What are your thoughts on the present contemporary Indian art scene?
VD: The present contemporary scene is very challenging because it’s changing at such rapidity – akin to the fashion industry. Indian artists now are extremely experimental and they are continuously pushing their boundaries, whereas galleries and collectors are equally encouraging. Though along with experimentation you do need a strong concept to earn you the fame you desire.