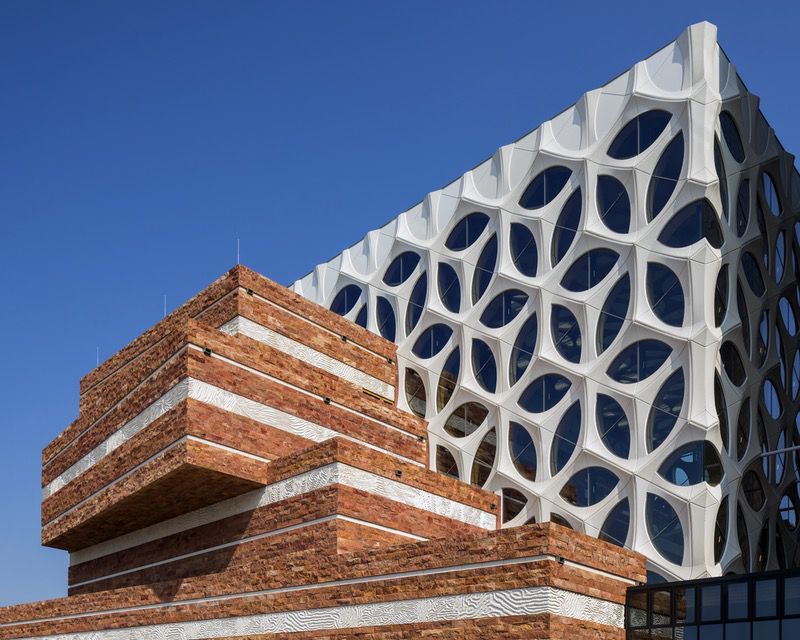 It’s hard to look up and not feel like you’ve stumbled upon a great treasure when you set foot on the grounds of the Naturalis Biodiversity Centre in Leiden, the Netherlands. The building’s exterior walls—layer upon layer of fiery stone blocks—glisten in the light of day. The travertine variety of stone has developed natural crystals spanning eons, and the sight is magnificent. This may be a fitting start to one’s explorations of the awe-inspiring natural world through the exhibits showcased inside, but the magnificence doesn’t stop here. Over a kilometer of white, gossamer-like panels envelop this structure—seemingly billowing in the breeze, yet well fossilized into its walls.

Naturalis is a national research institute for biodiversity in South Holland dating back to 1820. It houses over 200 researchers who contribute solutions to global issues like climate change. Open to the public, the museum’s growing collection of 42 million specimens—fossils of dinosaurs, mammoths, whales, dolphins, crystals, botanical species and more— make it one among the top five in the world. The centre was recently renovated by Neutelings Riedijk Architects who had commissioned Dutch fashion designer Iris van Herpen to design the textured panels. It’s a collaboration that’s as congruous as it gets.

The Dutch designer’s multidisciplinary approach to fashion is well-documented in pop culture. You’d have seen her sculptural attire come alive on the likes of musician Björk. In 2018, van Herpen and architect Philip Beesley collaborated to give form to ethereal couture and art installations. Using techniques like laser cut and 3D printing, her high-tech fabric and the resulting wearable art draws from a visual language that’s experimental and visionary all at the same time. Van Herpen’s work represents a true meeting of art, science and technology, having worked with not just artists and architects but also engineers. Plainly put, her work is hugely inspired by the fluidity and complexity of natural forms and by the architecture of things— and yet it defies definition.

The morphology of the natural world lies at the very centre of this biodiversity institute in the south of Holland. And, it was the natural shapes and textures of the diverse Naturalis collection that served as pure inspiration for the 263 panels visualized by the Dutch couturier. Like a richly textured ribbon draped around the museum’s stone structure, the panels mimic the erosion of stones and the composition of fossils, or, in other words, the Earth’s natural memory of the past.

“The extraordinary Naturalis collection and the infinite freedom of frozen forms I found in the archive, inspired me to explore the transport of time within nature’s ever-evolving dance. The erosion details within rocks, re-sculpted by water throughout centuries and the eternalized mysterious beauty of fossils moved me to drape and pleat with stone instead of silk. Three-dimensional biomorphic patterns entwine the in-and outside of Naturalis, like the archaeology of a dress,” explains van Herpen.

Van Herpen’s hand-sanded concrete three-dimensional designs appear as smooth as silk, thanks to a special technique developed for this project, say the architects. “Our office defined the position and material expression. Iris van Herpen developed the particular imprints. We discussed with her the fact that the panels should evoke the metamorphosis of biodiversity. Her profound understanding of natural phenomena as expressed in fashion was the main reason to collaborate. We loved the inspiring and fruitful collaboration,” says Michiel Riedijk of Neutelings Riedijk Architects.

As a whole, the visceral materiality of the all-new Naturalis Biodiversity Centre triggers emotion, too. Its new design by Neutelings Riedijk Architects forms a sustainable ensemble of existing buildings and new-build with each activity housed in a specific form. The staggeringly beautiful central atrium connects the existing offices with the newly built museum and laboratories. The atrium’s design consists of a three-dimensional concrete structure of interlocking molecules. Akin to a delicate lace-like exoskeleton of ovals, triangles and hexagons, the structure filters light into the atrium in a manner most monumental, the resulting effect equaling in magnitude to the staggering beauty of the natural world.