Design Pataki > A Guide To India’s Most Beautiful Heritage Libraries 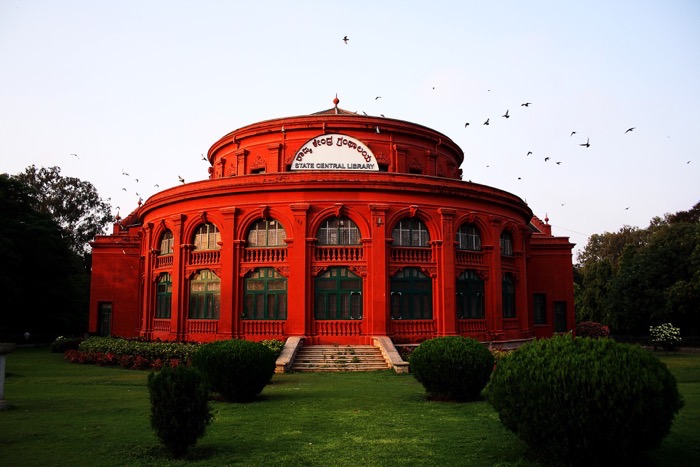 A Guide To India’s Most Beautiful Heritage Libraries

There are several irreplaceable aspects to libraries that have kept them going despite the world around them growing increasingly digital. While there may be faster, and on occasion more economical ways of accessing information – a great number of people, including us refuse to renounce the culture surrounding libraries. India is a treasure trove for heritage libraries, we have compiled a list of some of the most beautiful libraries that have stood the test of time –

The Connemara Public Library in Chennai is one of four National Depository Libraries in the country— receiving copies of all books, newspapers and periodicals published in India. Established in 1896, the library houses publications that are centuries old, as well as some of the most respected works to have come out of the country. Conceptualized and designed by H Irving, the then-consulting architect to Government of Madras, the library features a blend of architectural styles including Gothic-Byzantine, Rajput Mughal and Southern Hindu Deccani. While the ornate ceiling and stained glass windows are impressive in their own right, the space’s unique design also lends itself to the details – with animals carved on the armrests of the wooden chairs. To host the more contemporary elements required in a library, a new building was added in 1973 – accommodating a video room, a Braille section and an IAS study centre.

Housed in the iconic Town Hall that has become synonymous with the library itself, the newly restored Asiatic Society in Mumbai holds over a hundred thousand books including an original manuscript of Dante’s 14th-century poem, Divine Comedy, a 16th century Sanskrit manuscript of the Mahabharata and ancient texts in Persian, Prakrit and Urdu. The Town Hall was constructed in 1833 by Colonel Thomas Cowper, with the North Wing of the structure forming the library.

Spanning 200 feet, the pristine white edifice is amongst the earliest examples of neo-classical architecture in Mumbai. A grand flight of 30 steps leads to the Grecian portico lined with Doric-styled columns. The library’s flooring and bookshelves were built using Burma teak, and the spiral staircases are adorned with wrought iron. Additionally, the space is dotted with statues, busts and portraits of patrons, scholars and administrators from the 19th century. Since the structure was built in a pre-electricity era, it was fitted in with skylights. Overlooking the Horniman Circle Gardens, the Town Hall is one of Mumbai’s prized architectural buildings.

Established in 1774 by Nawab Faizullah Khan of Rampur, The Raza Library is a symbol of the princely state’s contribution to the preservation of Indo-Islamic literary heritage.  The Nawab formed the nucleus of the library through his inherited collection of valuable manuscripts, historical documents, books and other works of art, with additions being made by his successors. Not only is the library home to over 60,000 printed books, 3000 specimens of Islamic calligraphy, and texts from the libraries of Mecca, Medina, Egypt and Iran, but it also holds the most comprehensive collection of ancient manuscripts from South Asia. Since 1957, the library has been housed within Hamid Manzil, a fort designed by W.C. Wright. Wright’s architecture synthesizes elements from Islamic, Hindu and Victorian Gothic in a style known as ‘Indo-Saracenic’ which characterizes the majority of Indian architecture from the late 19th to the 20th century.

Bangalore’s State Central Library is one of the city’s most iconic heritage structures – owing to its striking red brick façade and its two-tiered curved central hall. Away from the metropolitan mayhem, the building is situated in Cubban Park with a rose garden out front. The State Central Library is Karnataka’s largest, housing over 3,140,000 books with a copy of every book ever published in the state. Built in 1915, the architectural style is heavily European like most institutional buildings from the era. The curved end of the building accommodates a series of intricate arched windows, with the teak wood frames within painted a dark green. The interior is classic yet understated, devoid of excessive ornamentation. However, the uninterrupted double height and barrel vaulted roof still attribute an element of grandness to the space.

The Allahabad Public Library also known as Thornhill Mayne Memorial is the biggest library in the state of Uttar Pradesh, holding an approximate collection of 125,000 books. Designed by Richard Roskell Bayne, the structure is a remarkable specimen of Scottish Baronial architecture – an architectural style rarely observed in Indian heritage structures. Built in 1870, it features sharp pillars and turrets of granite and sandstone. The building briefly served as the house of legislative assembly, and in 1879, the library was shifted in.

Apart from its vast collection of books, the library offers a large collection of magazines and newspapers in Hindi, English, Urdu and Bangla, and contains 21 Arabic manuscripts. It also has a collection of old government publications, parliamentary papers, and blue books dating back to the 19th century.

The David Sassoon Library stands amongst the grand museums and art galleries at Fort as a literary oasis in the cultural district of Mumbai. Built in 1870, this Gothic structure was named after the Jewish philanthropist who donated generously towards its construction. The place where Dr B R Ambedkar wrote the final draft of the Indian Constitution, David Sassoon houses a collection of over 45,000 books including several rare ones like a 1978 book of letters written to Queen Anne by her secretary.

Designed by architects J. Campbell and G. E. Gosling, the library was built using yellow Malad stone, with a white stone bust of David Sassoon above the entrance portico. The interiors evoke a sense of nostalgia – with vintage tiles, mid-century wicker furniture and wooden louvred windows all pointing to the past. The library also has a quaint back garden so readers can enjoy a good book tucked away under the shade of a tree.

Also known as the State Central Library of Kerala, this is the first public library of India – established in the year A.D. 1829 during the reign of King Swathi Thirunal of Travancore. While the library’s location shifted about for a few decades after inception, the building that houses it presently was constructed in the year 1900. His Highness Sree Moolam Thirunal constructed the red brick Gothic-style structure in commemoration of the Diamond Jubilee of Queen Victoria. An integral part of the state’s cultural landscape, the Trivandrum Public Library has over five lakh titles and subscribes to 300 periodicals.

The library is divided into several sections, including separate Members and General Reading Rooms, a Kerala Gazette Section, a Malayalam Section and a British Library Collection. Currently, an annex is being constructed adjacent to the main building – one of the main features of which will be an exclusive ‘Braille Wing’ for the visually impaired.