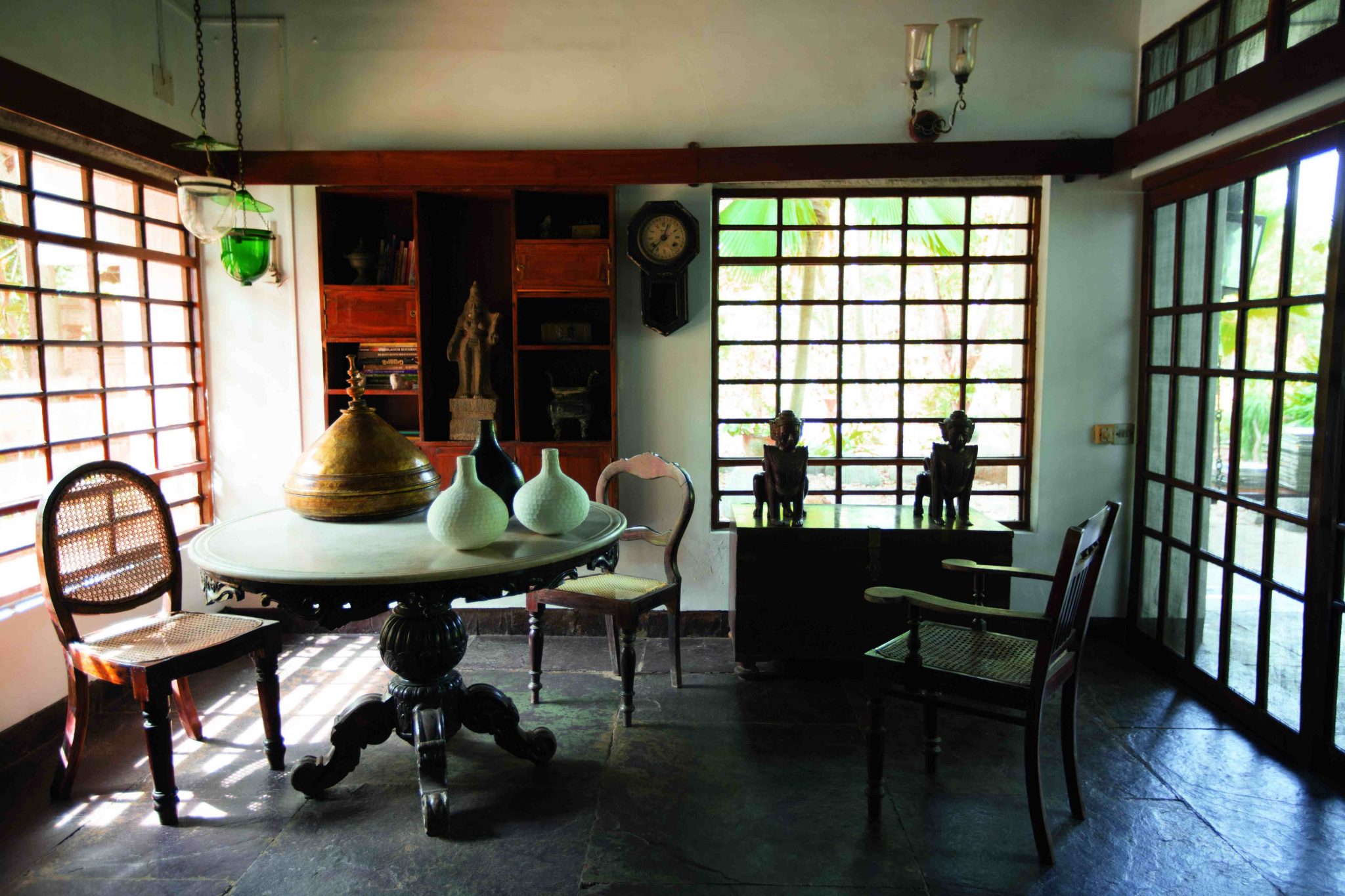 Inside Story – The Kapur’s Puducherry Home

A carefree canid sprawled across my knees reminds me I’m in Chennai, at the home of friends, and a three-hour drive to where Dilip and Jacqueline Kapur live in Auroville— the ‘universal township’.

The man who took leather goods manufacturer Hidesign from hobby to global brand slips into conversation without preliminaries. “What you should write about is not the house itself, but the rare and exceptional context of Auroville that creates the possibility of a house like this. Take it out of this environment, place it anywhere else, and it won’t make sense. Here even the dirt makes sense,” he suggests of the rough-hewn chocolate floor that blends seamlessly with the garden. Dilip had been through the motions of planning and designing a house, which he left when he separated from his first wife. He moved here to a one-and-a-half room block, built by master ceramicist Ray Meeker, which remains the core around which rooms were added when needed. “When Jacqueline came along 25 years ago, she said, ‘What a dump!’, and we built our home one kid at a time,” he reminisces with glee. So a room was added when his mother moved in, and another two when daughter Ayesha and son Milan were born. One room is now reserved for ‘adoptive’ children like Shaira (granddaughter of actor Shashi Kapoor) who lived with them for two years. A terrace was built when they acquired a wrought iron spiral staircase from an antique dealer without knowing where to put it!

Jacqueline of all trades.

She collaborates with Dilip on his leather business and the operations of their two boutique hotels in Puducherry, helms an apparel store and another for home products, has fashioned an accessories label inspired by her daughter Ayesha while also directing the latter’s budding acting career, reins at a riding school that hosts an annual competition with the highest prize money in the country, and is organizing the arts festival of Puducherry this year. “The rest of the time I’m just bored,” she quips. About the house, Jacqueline says, “It’s ratty, but happy. It’s our home. And where else will you find this?” gesturing expansively at the world beyond the verandah. The rooms are just for sleeping, she claims, and the family spends most of their time around this table or at another by one of three ponds in the garden. “When Ayesha, nine at the time, was in Mumbai shooting for Black, we used to pass Amitabh Bachchan’s house every day, and she felt terribly sorry for him. ‘Mama, our house is so much nicer!’”

You can find out more about the Kapur home in the March- April issue of Architectural Digest- on stands now.

This article was shared by Architectural Digest, India exclusively for Design Pataki readers.