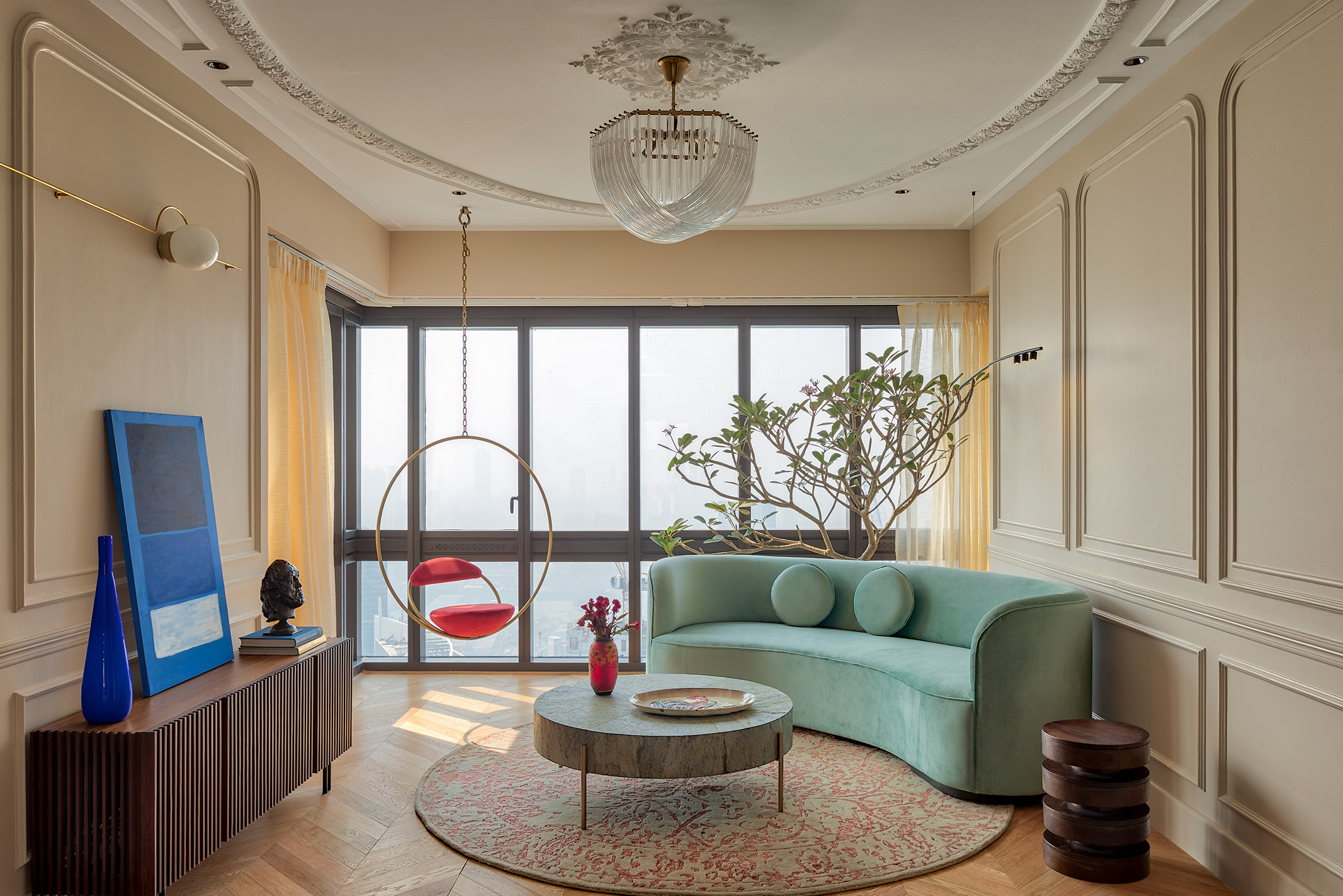 Inspired By Emily In Paris This Mumbai Apartment is “Très Chic”

Taking the internet by storm, Emily in Paris is a treat that has all the ingredients for a popcorn-eating binge watch allowing one to escape momentarily amidst the pandemic. A cultural phenomenon, this Netflix show not only transports one to the world of fashion but ticks all the boxes for offering breathtakingly stunning backdrops and highlighting the city’s beautiful architecture.

By taking cues from this show and seamlessly blending fantasy and drama, Noorein Kapoor designed this Mumbai home for a young couple expecting a baby. A feast to the eyes, this 913-square-foot residence comprises two bedrooms and resonates a romantic, Parisian vibe. “The client’s brief was to transform their little apartment. The area designed by us was only 550-square-feet consisting of the living room, passage area and the master bedroom as the other bedroom was to be made into a nursery which was already pre-ordered by the couple. Our client wanted the house to be young, bold and trendy” says Noorein Kapoor. This quintessential home showcases modernity, which is beautifully blended with timeless grace and is yet effectively functional.

“While speaking to the client I learnt that the lady of the home works with a Mumbai based French company. That reminded me of Emily in Paris and the famous office Savoir and that was it. From there on I worked on the mood board where I wanted to create an interpretation of a Parisian chic (inspired by Emily in Paris) X Art Deco home (inspired by Mumbai)” adds Kapoor.

In line with the show, the first impression of this home is that it’s glamorous and elegantly integrates the classic with the contemporary. Featuring a black door, chequered flooring and wall mouldings, the entrance comprises bold geometry and symmetrical designs. The black and white flooring in particular magnifies the passageway and integrates a sense of drama as one enters the space. “For the entrance foyer we played with a monochrome palette, making the space seem like a jewel box. The white passageway walls help create an illusion of space and the patterned flooring amplifies the area adding to its layers. We gutted the flooring and laid black and white marble stone sourced from Topstona, Jaipur. The key element in all Parisian style homes is mouldings or wainscotings and although we transitioned from one space to another with colours, we kept the wall adornments common” says Kapoor.

The art-filled passageway features bird lights which double as sculptural lighting showing the way through the house, a beautiful gold framed mirror sourced from Parrot and Lily and black-and-white images.

An eye-catching and decorative ceiling, chevron flooring, a chandelier, coffee table and swing chair features in the living room, adding character to the elegant space. “The ceiling adds an extra silhouette to the room and it took us a while to work with the artisan to get the correct scale and the intricacy in design. In fact, we had to make a dye to create this ceiling” says Kapoor.

“The sofa was customized in-house with our local team as it had to be perfectly tailor made to the corner of the room” she adds. A curvilinear sofa was a must for this home for two reasons – one to stay true to the design style and to create space in the living room to house a dining section. “The coffee table was sourced from Pinakin Studio. The Chandelier sourced from The White Teak Company was one of the major adorning pieces of the living room and it served as the perfect ambient lighting. Lastly, the swing chair that we custom-made at our workshop is a statement piece and adds a sense of playfulness, youth and geometry to this space. It also helps one turn around and watch the sunset from the 62nd floor of this high rise” says Kapoor.

The living room comprises a corner featuring the dining area which is right opposite the kitchen door and stationed against a panelled wall. “We bought our dining table from Hatsu along with the chairs, adorned the walls with mouldings and added round sconces as task lighting. We detailed the sconces with gold-finished metal fabrication to combine it to look as one grand piece” says Kapoor.

Adding a whimsical touch to the bedroom is its floor-to-ceiling windows, blue walls and four-poster bed. “The wall colour in the bedroom was inspired from the conference room in Emily in Paris. That shade of blue is the Terra Luna from Asian Paints which we finally found as the perfect match to our mood board” says Kapoor.

“The bed was our special project as we custom-made it at our workshop with our in-house team. Additionally, the wardrobes were made on-site. We didn’t want to overdo the panelling so we broke the design up with the center two shutters with fluted glass and black frames. This added a contemporary touch to the space and broke the symmetry of blue on the walls” she adds.

In order to design a compact space just like this residence, there are several ways of looking at it. “Ideally I would say one of the key tips is to keep the flooring the same to make the space look bigger and play with a monolith color palette. However, in this home I did the opposite. I think there are absolutely no rules in design and we need to understand the pulse of the space and what it can carry. In this home layering the space was key to make it look bigger and to detail out every corner, creating depth” says Kapoor.