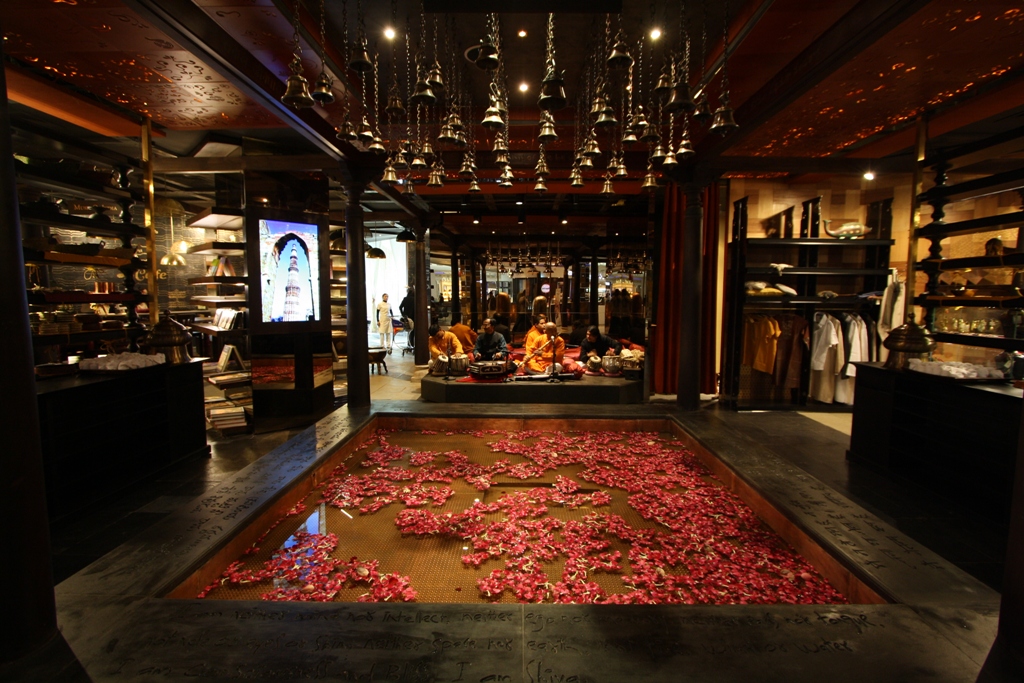 One is lured into Ishana right from the very outset, with a warm Namaskaram resonating across Indian classical tunes in an ambience reminiscent of a temple. Ishana enables customers to experience and explore the diverse elements of India through the interactive displays, narrative spaces & life-positive products as well as complementary services like Ayurvedic consultation, Astrology, readings, live dance & music performances, Mehandi application and live craft demonstrations.

The rich, spiritual and scientific wisdom of conscious living is gradually becoming a lifestyle choice for people today. The increase in spiritual awareness and the need for a holistic lifestyle is intrinsic for human wellbeing. In response to this shift in lifestyle, Ishana – The Conscious One was conceived and executed by the Internal Group of Ishana Employees of The Spa Group. Ishana showcases India as it was in its golden age with its expansive knowledge of Yoga, Meditation and Ayurveda; a reminder that even science was practiced as an art form in the rich culture of knowledge in India.
The primary idea was to recreate a space that was contemporary, and yet reflective of the Indian way of life. Ishana is inspired by the tenets of ancient Indian knowledge and pays homage to the same through various elements in decor that tie this theme together.  The space planning was done using the principals of Vaastu Shastra and included major elements of planning as practiced by the ancient Indian habitations.
Just as all human habitations in ancient times were settled near or around a water source, Ishana too was conceived around a ‘Healing Pool’ – a rejuvenating source of energy and positivity. The Healing Pool, which is perhaps the only such structure at any airport where the guests are encouraged to sit by or walk in the ankle-deep pool and feel the energized water remove pranic energy blocks from the human system. Beautiful scriptures are carved in different languages on all sides of the ‘Healing Pool’. This water is energized by a lingam created through a process of yogic alchemy and consecrated by Sadhguru – Spiritual Master and founder of Isha Foundation, Coimbatore. It is the only other such structure in existence other than the ones at the Isha Yoga Centre, Coimbatore.

Ishana Nature Spa, inspired by the tenets of Ayurveda & Yoga, is integral to complete the experience of Ishana. Drawing from the deep and complete understanding of the healing powers of nature and its unmatched ability to restore and rejuvenate, the Ishana Nature Spa therapies are designed to provide maximum benefits to the discerning guest. The city spa, located at MGF Mall, Saket is a spa lifestyle brand that brings Asian heritage to the spa scenario in Delhi. It boasts of therapies that are inspired by the unique knowledge  & application of natures best kept secrets & aesthetics. The spa located at IGI Airport, Departures, Terminal 3 is unique in its offering of express therapies that help its customers relax and rejuvenate in less than 60 minutes. The specially crafted therapies do not use oil, but employ traditional ‘pressure point massage’ based on the tenets enshrined in Ayurveda and Yoga. These therapies employ yogic postures and stretching movements that relax the joints and release hidden fatigue, making the customers travel-ready.

The decor of the spa is carefully appointed to look alike an ancient Indian temple with shahbad stone floors and slabs, pillars and colonnade, forest of bells and live music reverberating through the store. The retail sections are reminiscent of a colourful Indian bazaar.
The most important feature of the décor is essentially the success in bringing forth a traditional look in a format that is accepted in the modern world.  The play of vibrant colour amidst a dark background was again a reflection of the Indian way of life.
Ishana has won various awards like “Store design of the year-Multi Brand : Awarded by ET Retail Awards in Feb 2013” and “Customer service excellence in Specialty Retail : Awarded by Retail customer service awards 2013”, Ishana is an honest reflection of India as it is – a demonstration of the wide spectrum of expectations from Indian culture and heritage.
Photographs courtesy The Spa Group