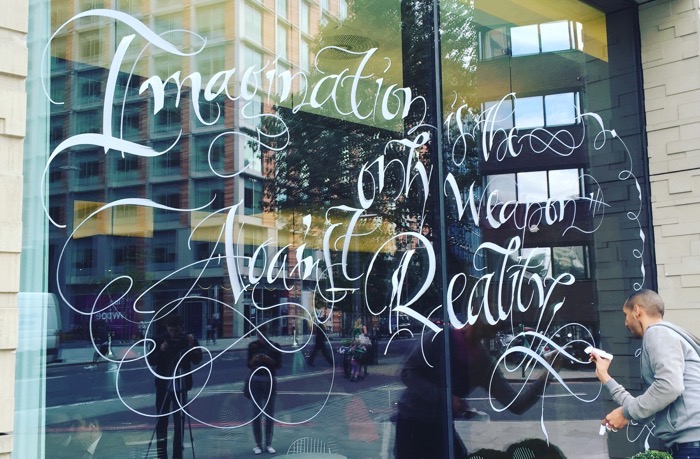 We’re part of a fast-moving world that’s growing increasingly detached, which makes the centuries-old art of calligraphy fairly incongruous with its time. Not only does calligraphy demand an uncommon reserve of patience, but it is also highly personal. Yet, this ancient art form has managed to stand the test of time.

Design Pataki was fortunate enough to speak to Paul Antonio, one of the most sought-after calligraphers in the world, while he was touring India. His illustrious clientele includes the likes of Chanel, Versace, and most significantly, the official Crown Office of England! Paul’s unparalleled passion for calligraphy is reflected not only into his work but in his teaching as well. His knowledge of historical scripts is almost encyclopedic – he knows a couple of hundred scripts fluently. Naturally, he had loads to share with us on the subject.
Here’s a snippet of the conversation that transpired –

Design Pataki – What has been your most memorable project to date?
Paul Antonio – There have been so many memorable projects but the one that impacted me the most was when I went out to Egypt to draw Egyptian hieroglyphs in a pyramid.  That was quite hard to top and it really affected the way I viewed calligraphy. It was so wonderful to be so close to a writing system that is so old and so beautiful. So I think that’s at the top of the lot.

DP – Which script do you enjoy writing in the most?
Paul Antonio – You know, writing for me is about writing. It’s about how we produce writing – moving from our head down to our hands onto a surface – be it paper, papyrus or vellum, or glass! Sometimes I get to work on glass which is really fun – it’s always lovely though a little bit tricky.
But it’s just about how shapes come out of our head and travel down our arm and are transmitted onto a surface, and for me, it’s not about favouritism in a script, it’s definitely about the script itself and how that script works within its context
Sanskrit’s wonderful to write in – sacred languages are really beautiful, they really resonate.
Some of the Chinese scripts, Japanese scripts, Sanskrit scripts and scripts from the middle ages are truly wonderful.

DP – Teaching seems to play a significant role in your professional and creative journey. What inspired you to teach?
Paul Antonio – I’ve always seen lettering in a different way.  I have a very analytical mind when it comes to geometry and the geometrical structures that we see in lettering forms. Calligraphy for most people is different – they complain about how hard it is to understand shapes and figure out why and where things are placed. Hence I’ve found that by the way I teach, the methods that I’ve developed really helps people to get a different perspective on how to approach the scripts. I’ve seen so many students blossom in class.  People just burst into tears and say, “Oh, I’ve been struggling with this script for so long, I can’t believe it’s so simple”, and I can’t even begin to tell you how that feels.

DP – That must make it all worth it.
Paul Antonio – All the travel, all the food (which in this country is amazing), meeting so many new people is great but when you see students shaken to the core because of something you’ve told them – it really is a blessing to be able to do that.


DP – What are some of the common misconceptions that people seem to harbour about the art of calligraphy?
Paul Antonio – I think the first thing, especially in this day and age is that people always call it a font – that’s what they are accustomed to because that’s what they see on a computer. Calligraphy is not a font. Handwritten word is a script. It’s generated by hand. You know, I’ve had clients complain about ‘inconsistencies of ink deposition’ and I’m like – it’s not a printer! It’s done by the hand! The variation in colour is a beautiful human trait and I think calligraphy is very different from typography. When you see a font being used, it can be fairly rigid. Something that’s calligraphic has life and vitality to it. People need to start understanding the differences between them.
Some other misconceptions are to do with speed – people fail to realize that when something is done by hand, not only does it take time to rule it up – cause you don’t see ruling up, a lot of lines have to be erased afterwards. So once you deal with that – you’ve done the ruling up, you do the writing, you wait two days for the ink to dry so that you don’t smudge it when you’re erasing the lines. So the ink has to dry! And watching wet ink on a surface is beautiful, it really is so lovely – this dome of wetness, it’s so luscious and vital, shimmering with life, and then it flattens down. But it takes time for that to happen! And I think in this day and age people are so accustomed to things happening quickly that they don’t think about the fact that these things take time. 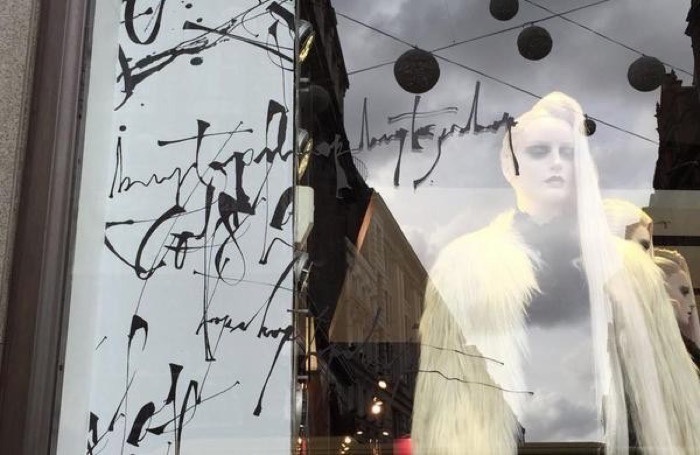 DP – Lastly, what advice would you give to someone wishing to start calligraphy?
Paul Antonio – You know, one of the things I’ve encountered with a lot of people coming to my classes here is that your tradition of lettering in India is very different from the Western world, and I think it’s important to recognize that. Equally, it’s important to recognize the level of accuracy that is needed. Now, there are different forms of calligraphy – there’s modern calligraphy, there’s contemporary-western calligraphy, there’s traditional calligraphy, there’s Devanagari – you have this wonderful pantheon of scripts, there’s so much to choose from, to study, to fall in love with, and the thing is, you have to understand how to tools work. If you don’t understand how the tools work there is no way you can get them to do what you want them to.
The next thing is, learn how your materials interact with each other. If your ink and your nibs and your paper are not working together, you will look at your work and doubt yourself while in fact, it’s just the materials not working together.
Next is accuracy. Learn to write a straight line. One of the things I’ve been doing in my classes is telling my students to write pages of straight lines, and they never realize how difficult it is until they do it. And I tell them, “If you can’t write a straight line with a pencil then how are you going to do it with a pen?” And so, becoming hypercritical about accuracy, shape, form, structure and what a tool can produce is vital.
Ultimately, there is one other thing that you have to remember – and that is breathing.
Most people hold their breath when they write, and so they try and hurry up when they’re getting to the end of a sentence because they’re running out of air. But if you breathe rhythmically and regularly, the breathing spaces your script. It’s like a meditation and it just gets rid of any stress. The process is just as beautiful as the end result.