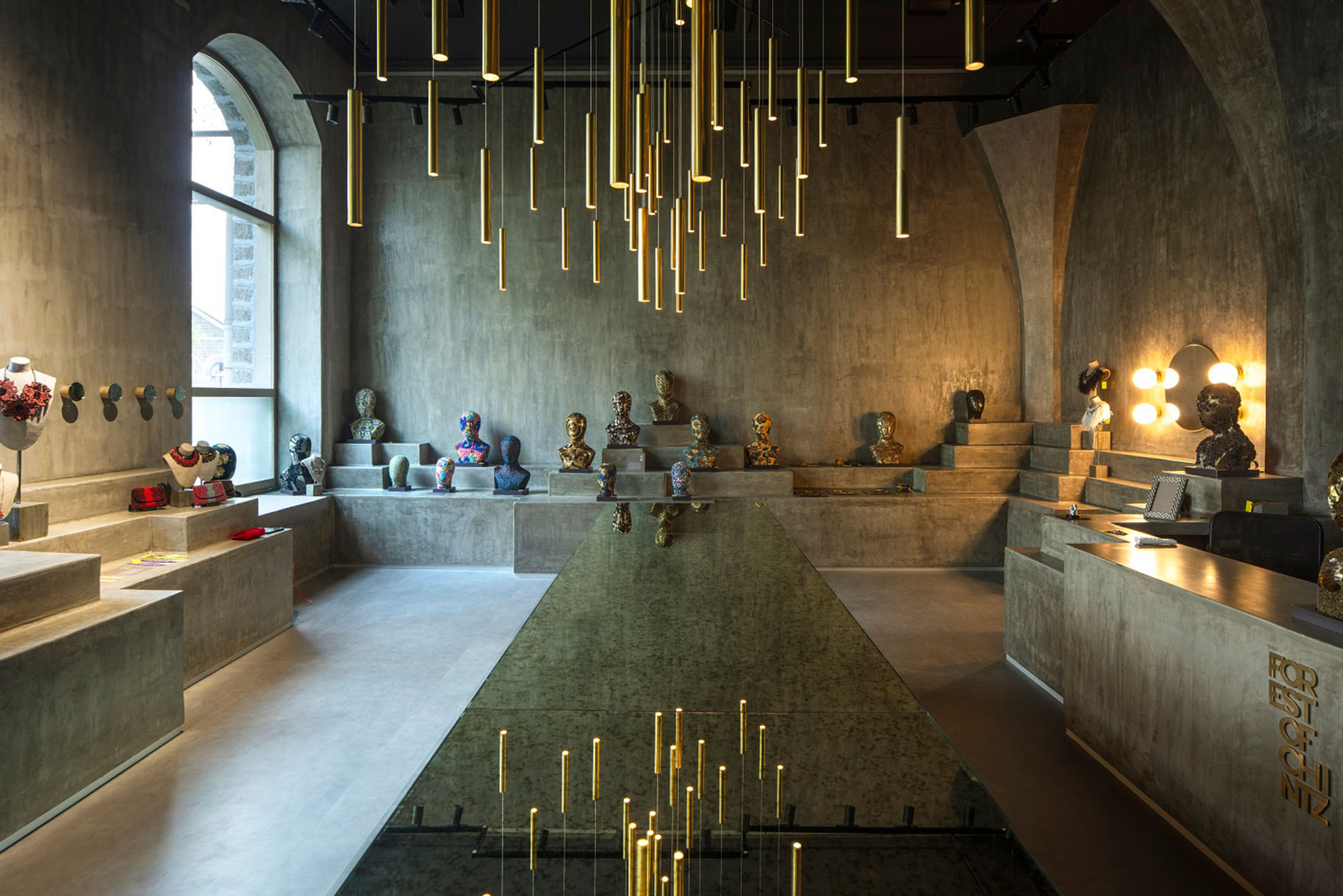 The intersection of interiors and fashion is an interesting one – a connection that’s equal parts tricky and tantalising. It’s raining retail openings in Mumbai, and whether it’s a statement neck piece you’re on the hunt for, or an extravagant, timeless lehenga, the newest places and spaces in the city don’t disappoint. This curated list of the newest flagship stores in the city sheds light on how brands remain relevant and breathe their design philosophy into their new four walls. Gone are the days when a brand’s unique touch was limited to its collections and clothes. In 2022, it’s the ateliers we must watch out for. We dissect three flagship stores and take a peek into how they remain true to the essence of the brand.

1. Sumangali Gada and Nitai Mehta’s Forest Of Chintz in Mahalaxmi

Designed by Shimul Javeri Kadri of SJK Architects, the Mahalaxmi store is as much about the cusp of lifestyle and culture as it is about selling statement pieces. The faux grey IPS finish that makes up most of the space proves to be the quintessential backdrop for the articles the brand sells. Subtle and raw, it allows the apparel to truly become the hero piece. Founders Sumangali and Nitai were keen on a space that represented “the wonderful craftsmanship in India”, a homage to the fact that the store draws its inspiration from the intricate step wells of India. An art-gallery like experience awaits the consumer upon making their way into the boutique. Sharp corners, tones of a subdued grey, and linear elements juxtapose a loud, curious collection, each piece embroidered to tell a tale. Suspended from the ceiling are lighting fixtures that add modernity and a touch of contemporary flair to an otherwise rustic space.

Amrita Khanna and Gursi Singh’s Lovebirds Studio finds its second flagship space in 19th century Wesley Church, in Colaba. Designed and executed by Saurabh Dakshini of Studio Organon, the sensibilities of the store match those of the brand – with shapes, structures, and clean lines running rampant, since these have always “been an intrinsic part of Lovebird’s aesthetic and design process.” A labour of love, the project began with first, a restoration process and then, an installation process, during which elements of the brand were brought in to add character to the space. What’s particularly interesting is that the store has an open plan layout, almost like a large landscape. The Deodar and patinated brass racks draw their inspiration from ikebana diagrams. Yet another ode to the rich history of the newly-renovated space is the original terracotta tiled flooring – that dates back to the early 1840s. It’s rich, it’s real, and it’s riveting.

Ballard Estate’s Dubash House is where India’s leading fashion house Tarun Tahiliani finds its home. Spread over a sprawling 7000 sqft, the store’s been designed by the couturier himself, in collaboration with Divya Thakur of Design Temple. Regal details like arched windows, ceiling-to-floor columns, and mirror-clad features make the flagship space a match for Tahiliani’s decadent collections. In fact, it’s the conscious decision to use muted tones of beige and sand that allows the apparel to stand out distinctly. Every design decision has been made keeping in mind the historical significance of the Art Deco architectural style that many other buildings in the area conform to. Whether it’s the lighting, the chandeliers, or the invisible edges that have painstakingly been rounded off, each and every element of the space is a testament to the ‘India-Modern’ philosophy of the brand itself. What’s worth noting, is that each section in the store plays host to a different collection.

While collections, trends, and styles come and go, one can argue that what remains constant in the fast-paced world of fashion, is a well designed, thought-provoking retail outlet. The pragmatics of fashion, four walls, and the intersection of the two are worth delving into. After all, it’s not every day that a space gets called ‘flagship.’ 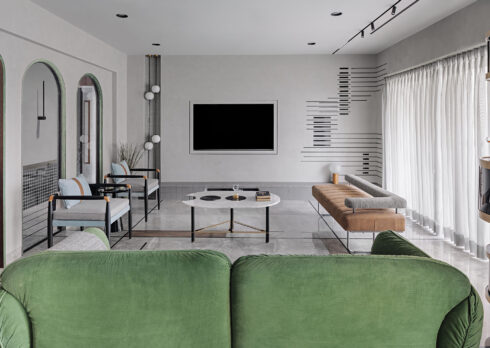 This Apartment in Lokhandwala, Mumbai Tells A Story Through Geometry And Texture