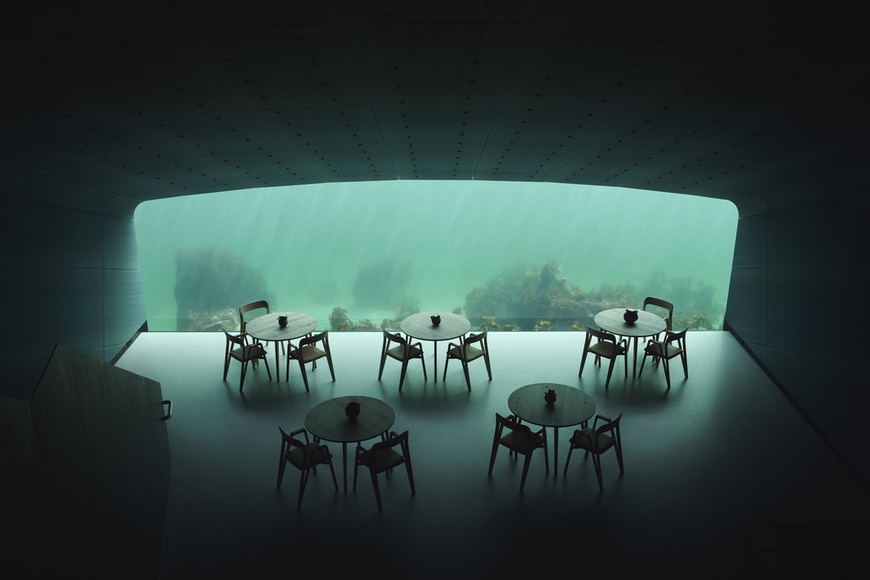 At the southernmost point of the Norwegian coastline, one encounters a structure partially immersed in the waters of Lindesnes, appearing almost like it has been tipped inside. It is none other than Europe’s first underwater restaurant, ‘Under’, designed by the Norwegian firm, Snohetta. Firmly anchored to the bedrock, the restaurant has been hosting guests since March this year, offering them a unique dining experience 5 meters below the surface of the water.

“The requirement of the design was to withstand the great outside forces, from the pressure of waves and the unruly nature, and our answer to this was to create a “concrete pipe”, which does this in a simple, yet understandable way. The soft arch shape of the cross-section of the roof helps to break the waves when they hit. At the same time, the shape also reinforces the feeling of the building acting as a binocular that allows you to peek into the seabed and observe the underwater world,” says Rune Grasdal, Lead Architect of ‘Under’.

The construction of the concrete structure, made up of half a meter-thick walls, took place 20 metres from the site, on a barge. Windows were installed and then the entire structure was guided to its location by a crane and tugboats. It was subsequently filled with water in order to make it sink, after which it was securely bolted to the concrete slab that was anchored to the bedrock. Prior to commencing work on the interiors, the water was completely drained out.

Materiality has played a significant role in imparting an intimate and tranquil vibe to the interiors, through the use of oakwood and textile clad panels. The oak staircase with steel railings and brass handrails takes you down to the mezzanine level and subsequently to the dining area. A vertical window extends from the champagne bar at the mezzanine level (about 1m below the water surface) to the dining area below. It has been thoughtfully carved out, revealing the waterline.

Interestingly, the architects have conceptualised the textile-clad ceiling to reflect the colours of the sunset transcending into the ocean , intending this to be a metaphor for the journey of making one’s way from the land above to the sea below. The hues subtly transition from a neutral shade to sunset pink, intense coral, sea green and ultimately midnight blue as one reaches the dining area, offering guests a dramatic approach down to the seabed. In the dining area, an expansive 11-metre-wide and 3.4-metre-tall window affords stunning views of the marine life. The restaurant also boasts an exclusively designed furniture series, made in collaboration with Hamran, a local carpentry workshop.

The restaurant doubles as a marine research centre and the structure’s concrete exterior have been designed to function as an artificial reef. Cameras and other measurement tools that have been installed in and outside the façade of the restaurant are intended to aid research teams studying marine biology and fish behaviour. The restaurant serves as a convenient setting for the researchers from where to study and observe various species in their original habitat. Snohetta’s collaboration with Trond Rafoss, a marine biologist, was integral to this project. “Trond Rafoss provided us with excellent suggestions on what measures to take to ensure we facilitated for a rich animal and plant life on the seabed outside the restaurant. This was very useful when it came to lighting and how we placed rocks and plants. His research and knowledge of the ocean life was an important part of the project,” shares Grasdal. Post the construction of Under, species of jellyfish have reportedly been discovered in the area already.