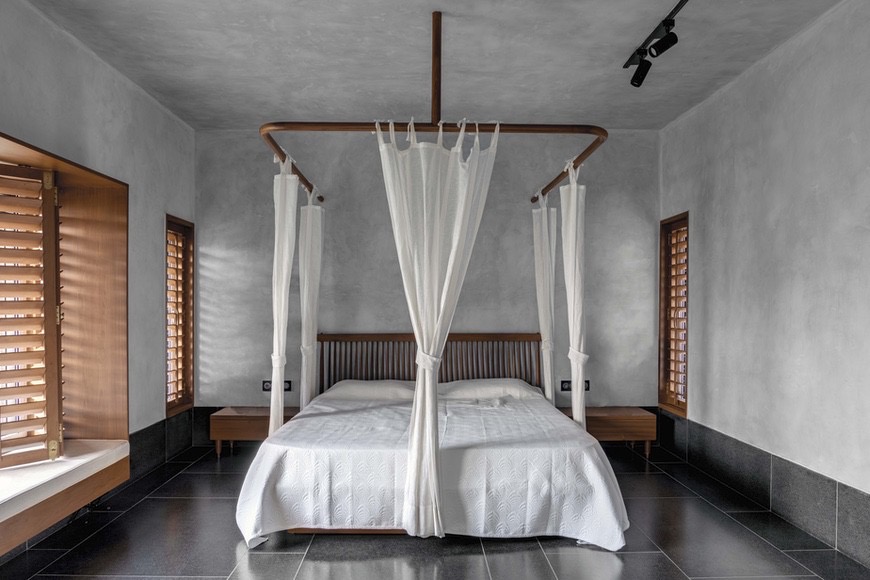 This sprawling Pune house is a remarkable juxtaposition of various styles and creative sensibilities. The sleek lines and organic forms that typically characterise mid-century modern design exist within a minimal, contemporary framework actualized by organic materials and local craftsmanship. Designed by Kalpak Shah of Studio Course, the T House eschews the notion of being ‘on-trend’ and takes timelessness as a touchstone of good design.

“A reference to contemporize mid-century modern architecture was the short, clear brief that the client shared with us,” says Shah. Structural allowances were few – the house sits within a community of 15 other bungalows which had to be uniform in facades, treatments and appearance. “Due to these constraints, the internal spaces and planning became our way to experiment with the design of this house,” explains Shah.

Named for its layout, the circulation areas and passages form the core of the ‘T House’ whereas the living spaces lie around them. This opened up the entire house to the outdoors, bringing in light and natural ventilation to each room. “In essence, the underlying ideology used in the design is referenced to the mid-century modern homes,” says Shah. The T House is a two-storied residence, with the living room, kitchen and dining areas, and a guest bedroom occupying the ground floor, with the bedrooms and the family room on top, connected by a sleek teak wood staircase.

A coherence in style seems to effortlessly extend throughout the house. “In order to convey an expression, it’s very important for the complete envelope to speak the same story,” says Shah, influenced by Mies Van Der Rohe whom he studied extensively, and Bijoy Jain, whom he worked within the past. These sensibilities are reflected in his conscious design decisions like raising the skirting to add solidity to the space, using white in the bathrooms to make them seem more expansive, and providing a connect to the outdoors through the bay windows.

Earth tones inspired by nature, black granite floors, and concrete grey walls form a backdrop to the finer elements that truly elevate the design. Most of the furniture in the house has been custom made by the studio with great attention to detail – right from the fluted glass partitions to the brass handles. Louvred teak wood doors and windows, metal lighting, and woven rattan furniture add to the sense of contemporary nostalgia the home evokes. True to the mid-century modern ethos, Shah made use of pieces inspired by icons and pioneers of the movement. Pierre Jeanneret’s classic Chandigarh Chairs and Hans Wegner’s Lounge Chairs feature throughout the living areas, whereas George Nakashima’s Straight Chairs are used in the dining area.

In blending mid-century modern aesthetics with contemporary Indian sensibilities, Shah created a unique space that fully reflected his client’s personality. Design elements like the striking four-poster bed in the master bedroom, sleek stepped seating in the family room and the uncharacteristically dark open kitchen further enrich the distinct individuality of the T House. 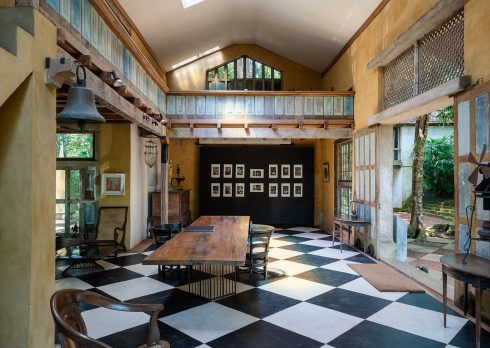