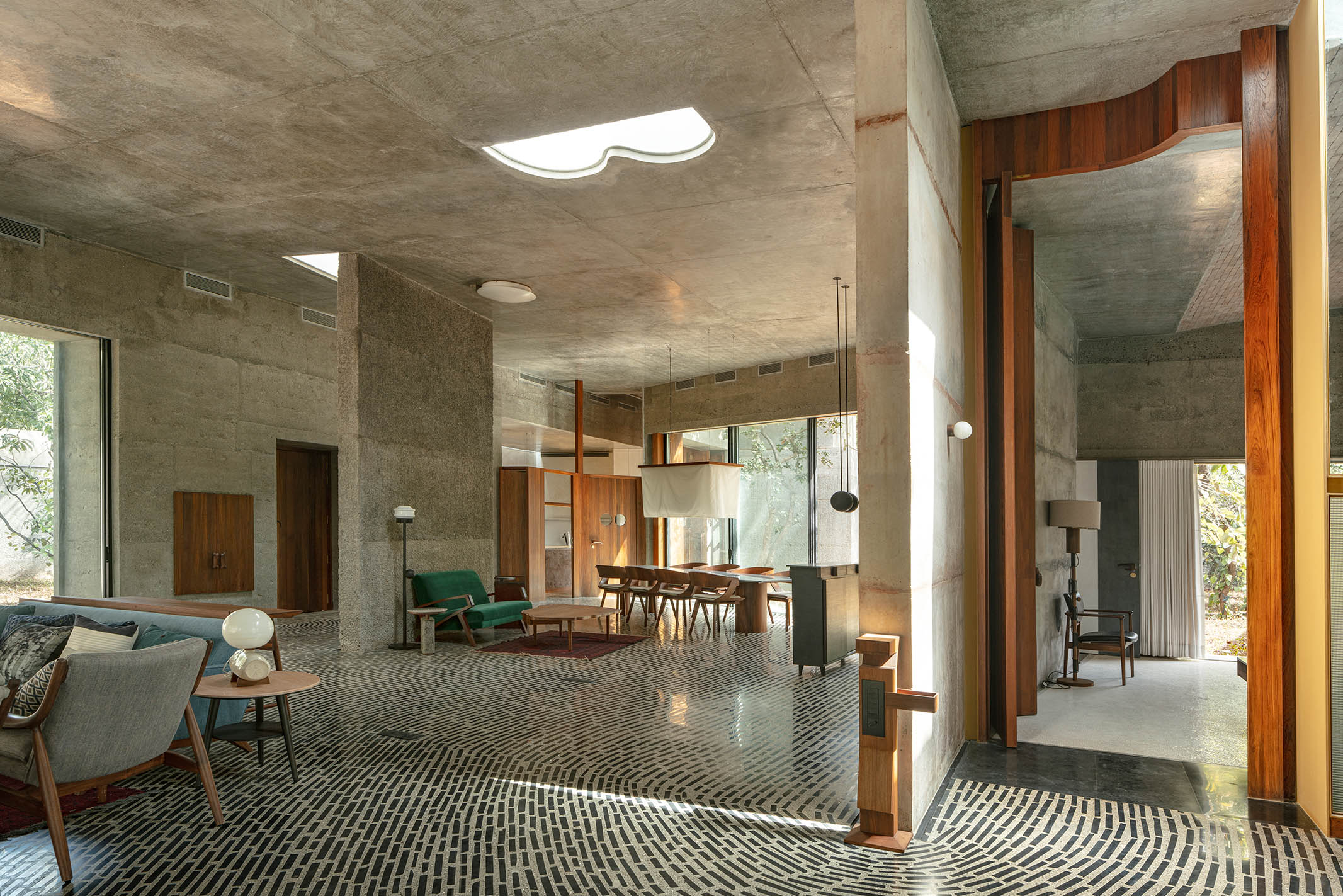 21st-century design encompasses a lot more than meets the eye, especially when it involves the conscious creation of a better, greener world. It has come to represent the intersection of sustainability, well-being, and ethics, with materiality at the very core of it all. This level of design thinking calls for experimentation with a set of plausible outcomes that can only be beneficial for our times. When it comes to residential projects, clients might be apprehensive about putting their money on the table to leverage the experimental mindset.

However, this wasn’t quite the case with a recently completed project led by architect Samira Rathod and her team at Samira Rathod Design Atelier (SRDA). The team included project architect Jay Shah, who worked relentlessly from inception till handover to see the project through. Dubbed the House of Concrete Experiments, the home is an apt and wondrous example of cause-and-effect thinking, or causality. It is testament to a truly favourable client-designer relationship and an indicator of the potential that qualities like trust, open-mindedness, progressiveness and innovativeness holds.

The House of Concrete Experiments was built from the ground up on the foothills of Deotalai in Zirad in the coastal town of Alibaug, near Mumbai. Several mindful decisions taken at the very outset of the planning stage paved the way for a subsequent set of sustainable steps that would eventually infuse the home with character. For one, it was the existence, and preservation, of a lush mango orchard on site that birthed the meandering, fragmented form of the 5000-sq-ft home.

Completed earlier this year, the House of Concrete Experiments by SRDA is the second home that Rathod has designed for the client, which meant that she was well acquainted with his needs and tastes — except that the client and his wife were now a lot older than before. A graduate of MIT and a believer of sustainability and supporting talent, he comes with the understanding that the environment and its care is primary, that costs towards anything new is not quantified in its direct outcome, but in what it does for years ahead, and that architecture is the highest form of art.

This time around, the brief came with the need for a comfortable, low-maintenance home that offered ease of mobility for an elderly couple who wished to continue spending a few good, relaxing days at their second home in Alibaug. This translated to a home that could in no way pose to be a struggle with climbing floors. What resulted was a large ground-floor studio space with one bedroom for the couple. Two guest bedrooms are stacked in an annexed building across open courts.

As the name of the home itself suggests, cast concrete is the one material that holds the fort. Employed across every inch of the home, it has been used in the ceilings and walls right down to the floors. The house itself was designed as a large column-free space with no internal walls to defy this concrete volume.

Playing around with the thickness of the walls ranging from 450mm to 1000mm thick, the team utilised walls as structural elements instead of placing them on a particular grid. “Because all the walls are actually columns, they support the building. But they are all strategically placed and not on a grid. They are random columns or walls that actually support the house and that’s the genius of my structural engineer,” says Rathod about Sushil Singh of Studiostruct.

Rathod and team harnessed the volume of the walls to accommodate storage space and recessed windows for waterproofing. And that’s not all; the opportunity lent itself well to the sustainable nature of the built environment. Drawing inspiration from ancient ways of catching cool breeze into spaces, they employed an active cooling method of air conditioning by carving out small ducts within the thick walls which then carry the cool air and circulate it through the large volume of the house. “All the air conditioning is housed on the terrace. Thermal insulation happens naturally because of the thick walls. Since the ducts come in through the top of the walls, it gives out cold air that in turn cools the entire space as well as the walls. The room stays cool long after the air conditioner has been switched off.”

There are no signs of ostensible ornamentation or painted walls in sight; at the very same time, the cast concrete volume is not as stark as one would imagine it to be. This is mainly due to the introduction of varied textures and hints of colour on the walls, all brought into play in a manner most ingenious. The concrete walls of the house are cast with debris from the site itself including broken brick, stone chips and large pieces of waste stone. The resulting walls that use recycled materials not only reduce the usage of concrete as the main material, but they also reveal a peculiar texture upon grinding and finishing. The walls in their entirety are a thing of beauty, in part due to the many textures, but mainly because of the larger embedded stones in the walls that can well be likened to relics.

Other experiments on these remarkably tactile walls include the use of waterjet concrete as well as concrete finished with pigment. For instance, the guest block is cast in pink concrete achieved by adding brick powder to the concrete. This resulted in a beautiful shade of blush. “It is what it is and there was no need to paint anything. We just mixed colours — one of the walls has got a pink colour on it which then faded. It’s all natural material which has its own life, patina, soul and character. The idea is to treat material like it has soul and character.”

There are no real demarcations in the house, thanks to the absence of internal walls or columns. Taking this boundless vision further is the creation of a seamless flooring created using a whirlpool effect that looks like one large artwork. For the floor, recycled waste stone pieces like black kadappa stone and broken ceramic tile chips were laid in situ and cast in concrete terrazzo prior to polishing.

There are no beams either, and yet again pulling off the unimaginable was Rathod’s structural engineer Singh who crafted large sloping cantilevered overhangs that defy concepts of structural stability. Aside from offering shade outside the main house, the three meticulously designed overhangs add a new dimension to the otherwise flat form of the house.

At 14 feet high, the cast concrete ceiling of the main House of Concrete Experiments soars high and even has giant wooden doors to match. Breaking the flood of grey, parts of the ceiling, such as the vaulted pink ceiling in the bedroom, were cast with beautiful blush fragments of the same brick used in the guest house.

With large windows that bring in copious amounts of light, the home is open on all sides and looks out onto the foliage and grove of trees. “Someone once said that the house is like a large veranda! But even though it’s really open and has no walls and rooms, it’s all about the way in which the walls and partitions are juxtaposed to create spaces within themselves. Without using the seamless floor to demarcate the home, it then becomes about how you place your windows and furniture within it. That’s how it becomes an imaginary enclosure,” Rathod explains.

Interesting pieces of furniture customised by Big Piano fit in just perfectly and are intended to incite wonder much like the architecture of the home does. Big Piano is Rathod’s furniture and lighting design studio that reflects the architect’s philosophy of creating spaces in which the ‘beautiful’ is not merely perceived but felt. Even the statement lights by Big Piano add to the intrigue, as does a cherry red surgical light by Mahendra Doshi.

But inevitably, it is the architecture and internal structure that was truly built to keep on giving. By day, strategically placed sky lights bring in light — and as the sun inches across the sky, the dance of light and shadows remains an ever changing mosaic of visuals. There’s no real room to feel aloof, alone or lost in the House of Concrete Experiments. Rather, every element thoughtfully serves to engage, turning the otherwise sprawling home into a very intimate, captivating and enchanting space.