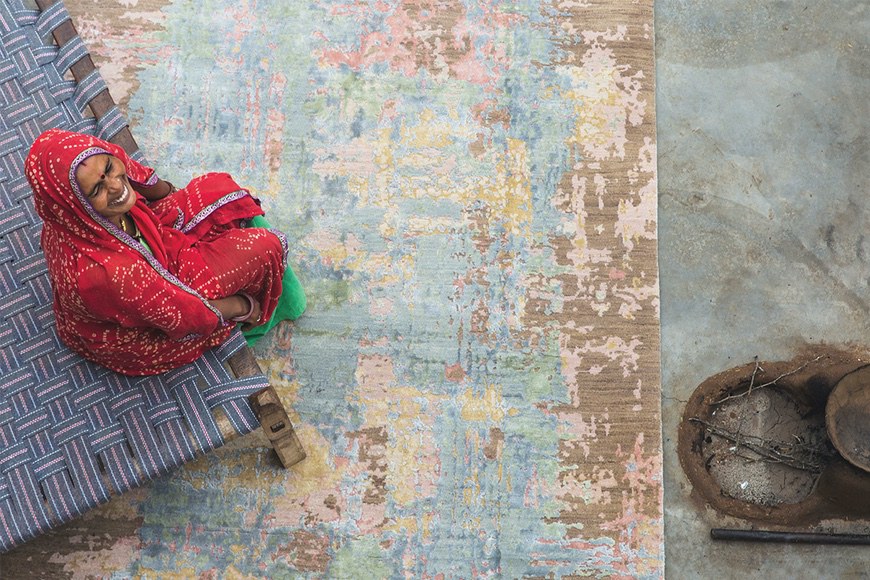 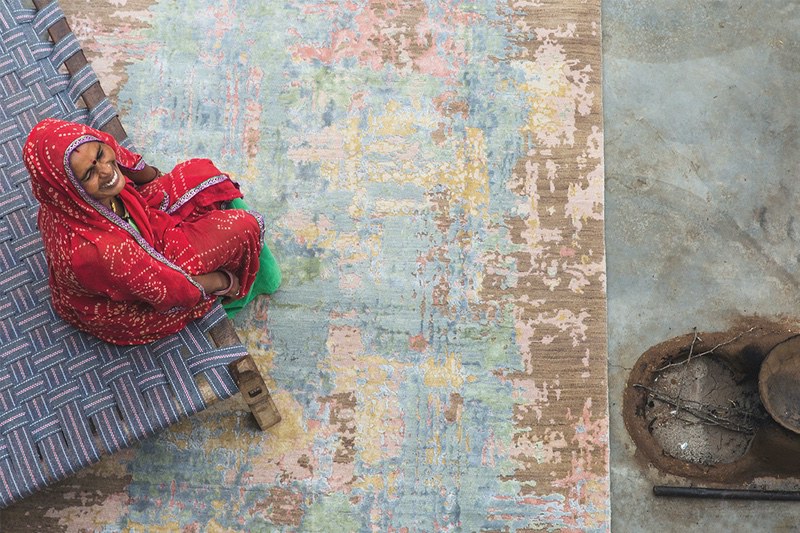 Sometime in the 16th century, a Mughal emperor brought the Persian tradition of carpet weaving to India, in order to assuage his grandfather’s discontent at the lack of luxury in the country. Unknowingly, he laid the foundation to a booming industry that would long outlive him. Cut to 400 years later and India is responsible for 40 percent of the worldwide export of handmade carpets, which translated into 1.6 billion dollars in 2019. Exporting to more than 70 countries in the world, the carpet industry alone provides employment to over two million workers and artisans* in India.

Why then, is the country’s association with this flourishing trade more a piece of subconscious information and not a championable acknowledgement of India’s unparalleled tradition of handcrafted production? Terms like ‘handiwork’ and ‘craftsmanship’ often conjure up images of tourist souvenirs and airport gift shops and therefore are rarely thought of as the foundation to billion-dollar industries. From earthenware to carpets, India’s strong heritage of skilled labour has contributed greatly to the export market. However, in recent years, the larger players in the export game have begun to understand the potential of yet another segment – the Indian consumer looking to buy local. The millennial generation is a veritable force when it comes to their purchasing power. They spend consciously, making holistic decisions about consumption. Their choices reflect a global design sensibility and a more comprehensive understanding of aesthetics than the generation before them. To cater to this new cohort of consumers, we see a rising number of exporters that have turned to domestic retail.

Design Pataki reached out to three such export houses established in the 1980s and 1990s, that have, in recent years ventured into the Indian retail market. These export houses established themselves on a global scale, manufacturing not only for high street companies like H&M Home and Crate and Barrel but for luxury decor brands as well. Having obtained a keen understanding of international design sensibilities down to the delicate nuances of colour and form, they concentrated their efforts inwards, eliminating the middleman and going straight to the Indian consumer. Across the three companies, it is the second generation of entrepreneurs that have taken over the domestic retail segment. 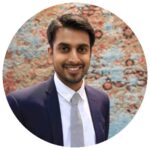 One of India’s largest manufacturers of hand-knotted rugs, Jaipur Rugs revolutionized the carpet industry with their pioneering business model of working directly with artisans. Propagating ancestral know-how and connecting rural craftsmanship with global consumers was the fundamental principle upon which the company was built. The cornerstone of the Jaipur Rugs’ business philosophy is to use the age-old art form of making carpets by hand as a tool to bring prosperity into the homes of rural artisans. Purely an export house until 2016, they now have retail stores in Delhi, Mumbai and Jaipur, with a plan to expand to most major metropolitan cities in India.

On The Journey Of Jaipur Rugs

“My father Nand Kishor Chaudhary began his journey from the backyard of his home in a small village called Churu in Rajasthan. He started off as a contractor for bigger export houses in 1976, but the unethical practices of the trade led him to establish a more honest and purposeful business. While the standard practice at the time was to use middlemen and contractors to work with artisans, he preferred to directly engage with the weaver and artisan communities in order to eliminate the malpractices that had been plaguing the carpet weaving industry. He spent nine years in the tribal areas of Gujarat training and nurturing artisans who now produce some of the most high-quality rugs in the country. Through his perseverance, Jaipur Rugs is grown from two looms and nine weavers to over 7000 looms and 40,000 artisans across 600 villages in five states in India.”

On Venturing Into Domestic Retail

“We were already selling to the best carpet stores globally which had a number of Indian customers. Back then there weren’t that many serious players in this segment who had the kind of stock that we were offering. We’ve always had a great range of modern carpets in our offering. After our success in China and some other countries in retail, we thought of looking towards India. The country was also growing rapidly and it was good to come back home and build a brand.”

“Right now the percentage is skewed towards our international clients. 5% of our revenue comes from domestic business and 90% comes from around 60 countries across the globe, with a major presence in the US.” 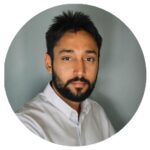 Established in 2014, Orangetree is the domestic retail offshoot of Basant – a major export house for solid wood furniture. Their design ethos centres around urbanizing Indian handicrafts to fit the aesthetic sensibilities of both global and domestic consumers. Where Basant’s larger focus lies on furniture, Orangetree’s inventory comprises lighting and home decor. The aim of both companies, however, is to make high-end design accessible through fair pricing.

On The Journey Of Basant And Orangetree

“Within the vibrant walls of the Jodhpur city, my father Mr. Vinay Kumar Jain started Basant out of a small factory with only a handful of employees in April 1998. Back then, he had only one American buyer to cater to. He had the vision to build an ecosystem that was infused with family values of hard work and loyalty. Initially, we were only into the export business and ventured into the Indian market much later. In 2014, Basant launched its domestic retail wing under the name Orangetree. We felt that the conventional Indian customer had matured – they were well-travelled and had a better understanding of global trends. In fact, they were now looking for designs that were at par with the international market, in real materials like wood, metal, glass. They appreciated our look of ‘contemporary craft’, wherein the form was very contemporary but the soul had a distinct craft flair to it.”

On Modifying Their Collections For Indian Consumption

“We do modify our export range a little to suit our domestic customers. We make changes in size, storage, and colours to suit the Indian customers. The sizes are smaller to suit the upper urban class, we incorporate storage into the beds to make them more functional, and the colour of the wood gets darker to match Indian aesthetics.” 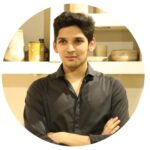 Ellementry is a subsidiary of Dileep Industries, a Jaipur-based export house established in 1989. Their primary product lines consist of handcrafted furniture, kitchenware, cookware and artefacts made from sustainable materials. With a vision to combine the beauty and functionality of Indian handcrafted products with international tastes, Dileep Industries made their mark in the wholesale world exporting to the likes of international giants including Crate and Barrel, Ikea and Zara Home. Then in 2018, Ellementry was born to cater to the needs of the Indian retail market, that rose from the dearth of branded goods in the handcrafted sector. Ellementry started off as an e-commerce company, but by the end of the first year itself, opened eight offline stores across India and are poised to open more in the coming years.

On The Journey Of Dileep Industries

“Dileep Industries is the brainchild of my father, Dileep Baid. He started his company with an aim to narrate a beautiful story with handcrafted products that have an international flavour and functionality too. It was a tough task but he was determined, and so he hired an international designer to design the products along with local artisans who could handcraft them. During that time, it was not easy to hire an international designer as their salary accounted for sixty percent of the total costs. But my father knew that for a global appeal, it was necessary to have a perfect amalgamation of international tastes and traditional patterns. He started his business from Jaipur in India, and he got his first export orders from Ikea, and then H&M Home, Crate and Barrel, Zara Homes and the list is still on an increasing spree.”

“I included the problem of food safety, cultural revival and sustainability in the brand pillars of Ellementry. We have provided an artistic vision to everyday things by incorporating natural materials, traditional skills and narratives in our products. To bring back the grandeur of Indian culture, we need to make the Indian craft contextual to the contemporary world. Our product catalogue is planned around Indian culture, tradition, craft, climate, art, and artisans.”

On Sustainability And Tradition

“Each object of the traditional Indian kitchen harks back to familiar rituals of Indian culture. Authentic Indian cuisine heavily depends on the materiality of its classic cookware. Brass, clay, marble, ceramic and cast iron were extensively used in Indian kitchens during the olden days. People are getting these back to their kitchens, not just for their health, but for the health of the environment too. This is why our Terracotta and Ecomix ranges are the fastest- moving, and are always in demand. I firmly believe that sustainable design is no longer a thing of the future. It is required now so that its benefits penetrate deep into our lives, and slow down the consumption of our fast-depleting natural resources.”

*As is indicated by the Carpet Export Promotion Council of India