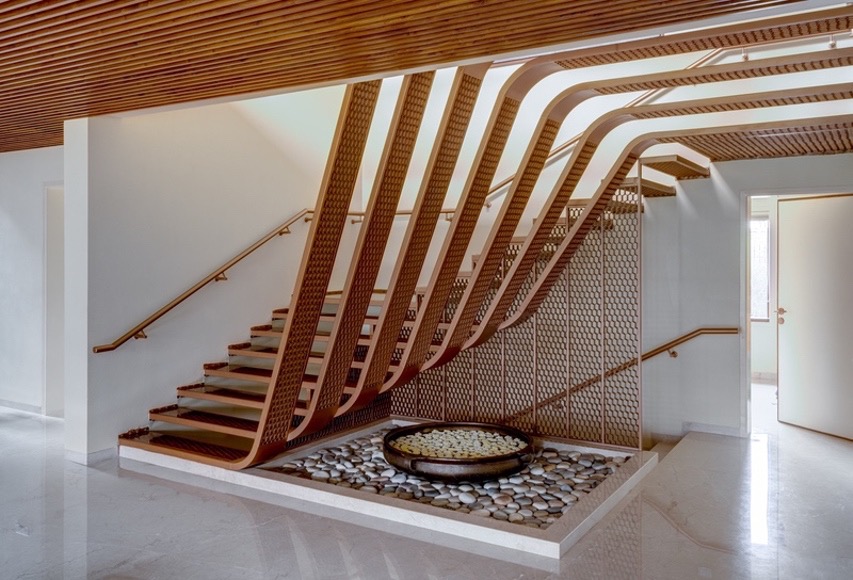 A Solar-Powered Self-Transforming Facade Regulates The Temperature At Hive

If you happen to visit Vesu, an upcoming area in Surat, Gujarat you just might catch hold of this futuristic piece of architecture – a unique combination of art and engineering called Hive. Designed by Ahmedabad based architects – Open Ideas, this structure is a bold example of India’s foray into artistic engineering.

Hive, as the name suggests, consists of a hexagonal patterned facade inspired by honeycombs and carbon crystals. The client, being well informed about architecture with his core competency in mechanical engineering was clear to ask for a structure that resonated with his profession in the diamond industry. A ‘smart structure rendered in metal and mono-space living area‘ is what home meant to him. With extensive research and a lot of prototyping, the architects delivered this dynamic powerhouse.

Hive, 5 years in the making consisted of numerous years of research and energy model simulations – understanding the temperature variations and radiation during the years. The solar energy capitalised by the plot was studied for an entire year before strategic decisions on the design of the house were made. Cloud cover, humidity, external dry bulb temperature, shadow patterns and various other aspects were studied extensively before the design could be finalised.

With metal being the primary material, a long span, lightweight, complex form of structure was envisioned that also ensured fast construction. The architecture of the house is expressed as an angular V-shaped structure oriented towards the green pockets spread around the house. The entrance is created with sunken courts and stepped gardens with a linear corridor to mimic the experience of walking on a bridge in a valley.

The internal space, as requested by the client was designed to be open and fluid. Without the use of partition walls, the space has been divided sensorily into public, private and semi-private zones using bespoke partition units made up of timber. “The idea was to have sculptural artefacts dividing space than walls. This gives openness to space, light filters through the hive facade and makes it more dynamic,” says Monarch Champaneri, principal, Open Ideas.

But as one can see, the highlight of the entire building is it’s solar censored hexagonal ‘hive‘ auto-open facade. As said before, the geometry of the facade is inspired by diamond and honeycomb structures while the operation was inspired by heliotropism – the blooming process of flowers. The design of the facade is based on structural strength, transformability and biomimicry. Analysing the quality of the light exposure and thermal comfort levels inside the house, the facade adjusts its openings to keep the interiors cool and comfortable.

This modern facade can be operated in three ways. One through solar sensors on the facade that records temperature and feeds it into a “micro controlled based radio frequency board“. This was designed by WNeuron Network Design startup, and it operates the facade based on solar intensity. The facade can also be operated using time – like early morning the entire facade can open and close when night falls. Apart from these methods, it can also be operated through an app. The facade uses solar energy for its operation, which is taken from the solar panels and stored in a battery. This makes it a self-sufficient system. These hexagonal openings also add to the aesthetics of the house by sciography- casting patterns based on the sun’s intensity and path.

With the entire house run on solar power, they have also been careful to look into water recycling. The design allows for it to harvest rainwater, which is usable for portable cooking through a separate water tank and excess is diverted to a percolating well. The facade mechanism inspired by doors of airport buses, the structure of the staircase inside inspired by the structural formation of hexagonal diagrid popularly seen in Ikea furniture pieces and ‘kadki door’ of forts as the entrance door are various small but thought down aspects of the house.

The use of metal with SS powder coating for the facade with a combination of wood and stone for the interiors provide the building with this bold image of a single colour that changes as per the time of day and intensity of sunlight. While there is greenery all around the building that compliments the bronze image of the house, the architects have also ensured sufficient greenery inside in the form of small gardens attached to each bedroom.

“ Our design was very ambitious and didn’t have many precedents. The client was open-minded and brave to take risks. Our main challenge was first to get creative and come up with innovative ideas and second to go the extra mile and get it executed with the best quality possible. We took this project as an industrial design problem then an architecture project.” says Monarch Champaneri. The speciality of the project was the client who was so open-minded and ready to experiment, which is a rare opportunity. Despite taking five years, the project has given the architects the confidence to think differently – think big, and reinvent architecture for the new world we live in.