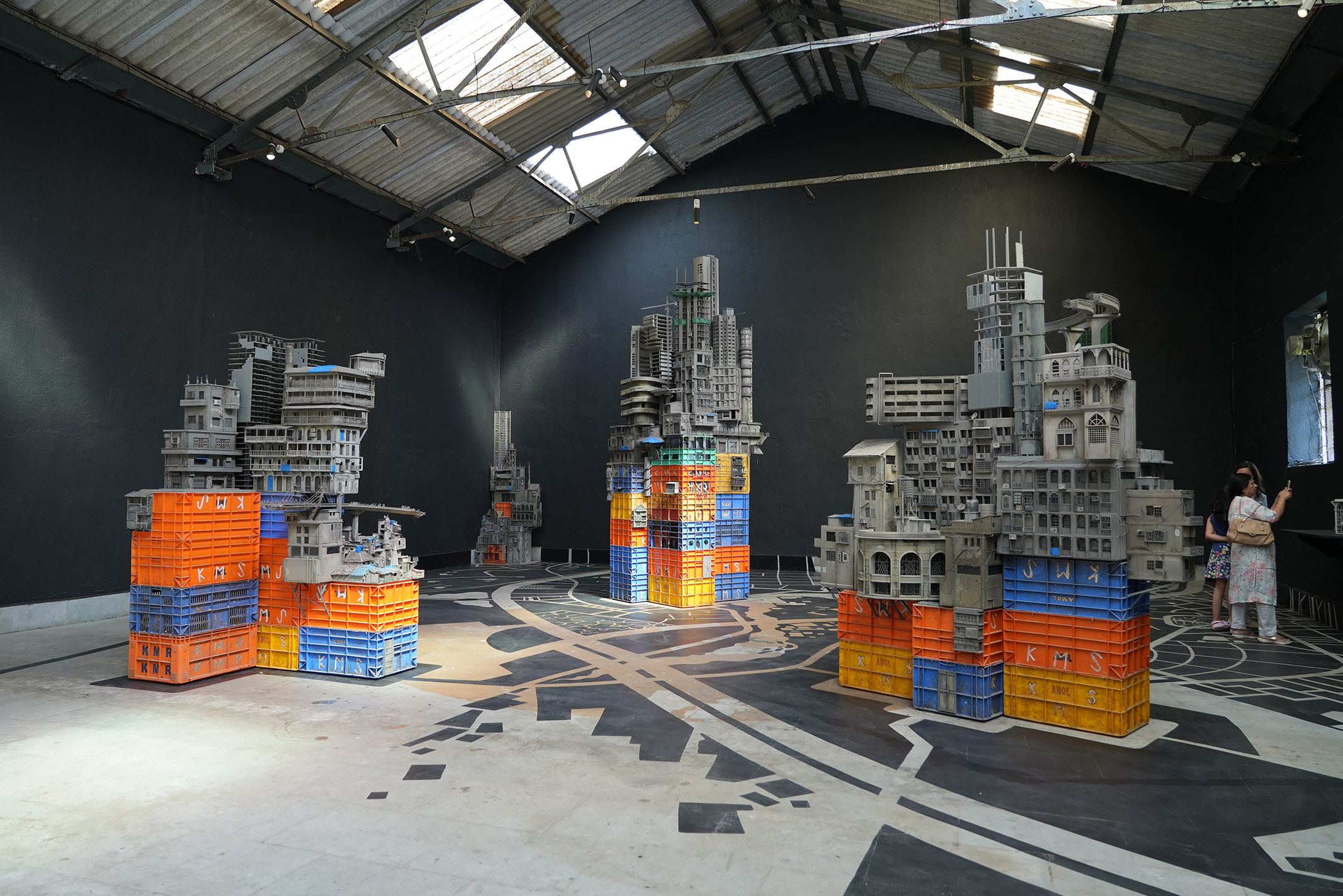 With the city’s coastline drastically changing, the Sassoon Art Docks attempts to once again make the Mumbaikars feel closer to the ocean and its magic. While the infrastructural facelift has truly redefined the city’s connectivity, an emotional heartfelt voice reaches out to the Koli community – the original inhabitants of Mumbai whose life completely changed. For the better or the worse? – a question that continues to linger within the true Mumbaikar sentiment.

This critical reflection is echoed within the tri-month long Mumbai Urban Art Festival (MUAF). The city frolics to the extreme end of South Bombay at its oldest docks with the return of this massive scaled festival, after a hiatus of five years. With vibrant murals and intriguing experiential installations, the docks will leave the beholders introspecting on the socio-economic know-how of the bay.

These changes in the city coastline are evidently depicted by Sameer Kulavoor and Sandeep Meher in their mixed media installation titled as metromorphosis. Almost like a life-sized Lego world, the artists have constructed a sprawling version of the metropolis with its multiplicity, complexity, scarcity, and density.

Departing from this very idea of infrastructural development, collaborative installation by Sajid Wajid Shaikh and Ronak Soni explores the idea of the web of pipes and the differential access across different tiers in the society. Ironically, the builders of this growing urbanisation are often denied access to the water supply they built. The larger-than-life sized installation poses a question to all city dwellers – What would pipes mean to you if you were not allowed a tap connection?

With diverse public art installations dotting the dock, Parag Tandel’s Vitamin Sea sculptures probe the transient seascapes of Mumbai. Hailing from the Koli community, Tandel’s resin sculptures dive deep into long standing myths associated with marine biology. Depicted with a glowing yet dull unadulterated quality, the art reflects on the suffering of the marine ecosystem due to the city pollutants.

While Tandel associates with long standing community myths, Rithika Pandey’s wall mural titled Shrine for my Oceanic Mother immerses into a post-human mythological world. Her fictional environment depicts a post-apocalyptic world where a deadly flood unfolds the rise of the deep sea ‘nuclear goddess’. There is a sense of enigma about the confrontation of the uncertainty of the human future. In this post-pandemic world, a similar air of uncertainty continues to drive the city lifestyle with drastic constructions and climate change after effects.

On the other hand Kerala art collective TRESPASSERS’ vibrant murals titled Refraction of Reflection presents an outworldly landscape of sarcastic encounters of city dwellers with the sea. Curated at surprising corners of the docks, the wall mural seamlessly animates the exhibition grounds with a pop of colour.

In complete contrast to the vibrant wall paintings, French artist RERO converts a room into an immersive world that explores the interdependence of a polar duality – the tragic and the magic. The artist curates a display using found objects in the Sassoon Docks. Juxtaposing mirrors and fishnets, the installation entangles the viewers within a play of words between ‘sell fish, shellfish, selfish and no selfie zone’. The end objective highlights the economic exploitation of marine ecosystems and their consequences on the environment.

Amidst all of the hustle and bustle within this depiction of the city that never sleeps, Serge Attukwei Clottey’s installation embodies the true emotion of the magnificent Arabian Sea with his installation titled Sea Never Dries. Interestingly, the artist incorporated recycled yellow gallon cans that were originally used to store cooking oil when supplied to Ghana. Once discarded, they clogged waterways and eventually ended up polluting the ocean.

Presented by St+art Foundation and Asian Paints, MUAF plays a crucial role in commenting on the growth, development and status quo of the city. The artworks embody the true spirit of the Bombay coastline. There will be some exciting surprise pop ups in several areas across the city including one at Apollo Bunder during the upcoming Mumbai Gallery Weekend. Meanwhile, all you need to do is ‘follow the smell’ and lead your way to the cultural district of Sassoon Docks.