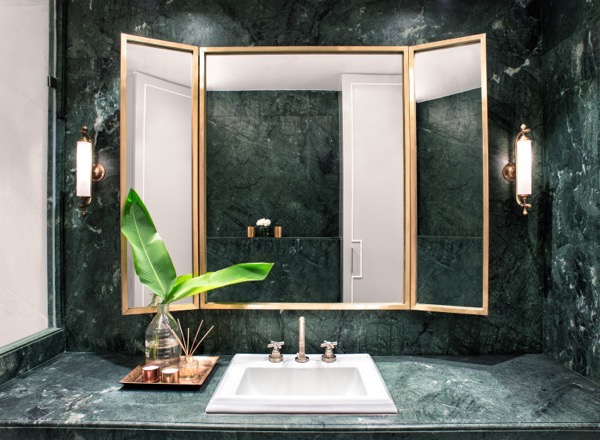 This Luxury Apartment Is An Art Deco Hideaway In Mumbai

When it comes to living in a city like Mumbai, it seems like functionality always trumps luxury. When you spend most of your day out and about sometimes it’s easy to forget that being able to return to a beautiful home improve your overall quality of life in ways that nothing else can. Design Pataki knows this better than anyone so when they took on an interior design challenge at Signature Island in Bandra Kurla Complex, the goal was to create luxury and prove that rental homes don’t have to compromise on comfort.
The team – led by interior designer and Design Pataki founder, Esha Gupta – took this already striking 6,000 square foot space and set about turning it into a true paradise. The goal was a 1920’s inspired Art Deco look that was bold but still adaptive enough to act as a base for the personal style of each new tenant. The major focal points in this project were the bathrooms, kitchen and bar area, each of which was lent an individual identity that tied in to the overall theme of the apartment.

The guest bathroom was done up in a classic, old-school Indian stone. The deep jade green of the counters was offset by the antique brass fixtures and mirrors, all sourced locally from Chor Bazaar. In the two children’s bathrooms, the natural Indian grey stones used that stole the show. They really pushed its diversity, using it as both a wallpaper and flooring in the larger bathroom. To create a depth of colour, the stone being used on the walls was sun-blasted and darkened, the resulting contrast gives a unique look while maintaining the identity of the space. It works especially well with the dark wood used to accent the pristine white Victorian style bathtub. In the smaller of the two children’s bathrooms, we get a glimpse of the chevron, herringbone pattern that runs throughout the flat in the form of warm wood panelling.

The Master bathroom is the stuff of designer dreams, the brass fixtures make a reappearance, this time against a field of pure white. The sickle-shaped brass shower head draws focus while following the classic Art Deco lines of the design while the neutral colour palette that extends into the walk in closet area and the dividing panels lends a contemporary edge to the room. The kitchen and bar area also maintain the neutral statement with grey cabinets and white countertops. An abstract chevron makes another appearance in the flooring for both rooms and reflects the continuity of the home. Though every space has an individual character there were a couple that became Esha’s personal favourites. The jade green of the guest bathroom with its traditional Indian stone and the innovative stonework in the larger of the children’s bathrooms are the elements that she most enjoyed executing. With its monochromatic tones and elegant lines, this airy four-bedroom house has truly been transformed and is ready for a family to move in and make it a home.