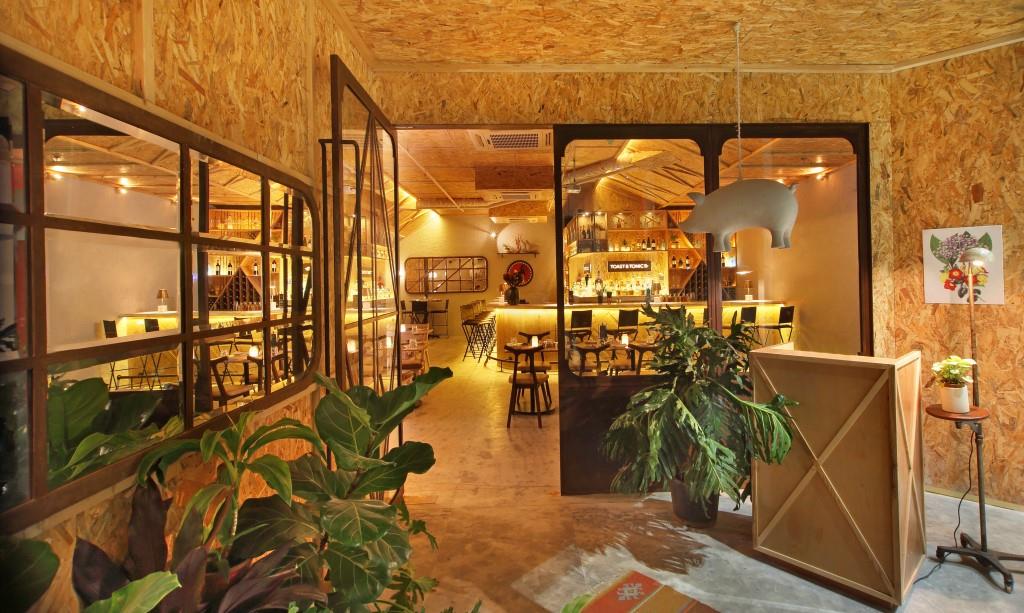 What do you get when you take the boho charm of New York’s East Village and cultivate it in one of India’s most metropolitan cities? In a word – magic. When Toast & Tonic opened in the up-and-coming corporate district of Bandra Kurla Complex in Mumbai the city was abuzz with intrigue. The follow-up to the critically acclaimed restaurant in Bangalore, their Mumbai debut was met with great anticipation from the city’s culinary connoisseurs.

Chef Manu Chandra, a student of the Culinary Institute of America – and creator of smash hits such as Fatty Bao and Monkey Bar – had a simple dream of bringing NYC’s laid back East village vibe to the frenetic pace of Indian cities.  The design team from MAIA Studio, headed by creative director Shruti Jaipura envisaged a space that was playful but elegant.  They drew on a few elements from the Bangalore design, but the new space has its own identity and manages to effortlessly combine modern aesthetics with old world comfort. The façade was made from mild-steel sheets and flats which were allowed to rust naturally for a more weathered appeal. The chipboard walls and crate-wood panelled bar may seem a bit rustic for a fine-dining restaurant yet it actually ties in well with their dedication to creating an engaging atmosphere. The marble floors inlaid with brass and the surfaces treated with peanut shells expose the raw honesty they were trying to embody.

Custom made farm animals hand cast from polycarbonate add a touch of whimsy to the otherwise graceful space.  Other décor elements like dried wheat, jowar, sculpted sausages and cacao pods mirror their organic approach while adding textural focal points to the room. The light timber is offset by the many earthy tones found in the leather and wood chairs and colourful tiled floors. The use of leather is continued in the custom made brass wall lights which in turn is complemented by the raw silk lampshades of the floor lamps.

The open-plan dining area is centred around the sprawling L-shaped bar that dominates the space and unlike most places the bar stools look like you’d be able to enjoy a full meal at one without fear of a backache. They are renowned for their cocktails so before you take your seat, order up one of their unique creations, all inspired by the city around you. Though their menu is decidedly international, Chef Manu is committed to highlighting indigenous produce. Every aspect of the menu is carefully tailored to utilise often ignored local ingredients to create innovative and international standard dishes and his commitment to sustainability extends naturally into the restaurant’s design elements.

At every step industrial vibes are undercut by subtle luxury, raw timber coexists peacefully with modern design as recessed lighting throws a warm glow on a style that can only be described as barn-chic. Between the welcoming interiors, drool-worthy menu and innovative cocktail list, there’s nothing more you want wish for. Toast & Tonic is already a Bangalore icon and now it’s already on its way to becoming a permanent part of Mumbai’s restaurant elite.